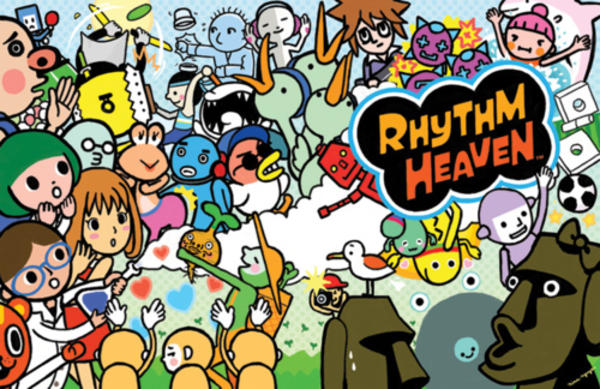 Rhythm Heaven (Rhythm Paradise in PAL regions) is a series of Nintendo video games based around the sense of rhythm and reactions, being full-to-the-brim with a large variety of minigames. The first entry to the series, Rhythm Tengoku was released on the Game Boy Advance, introducing many regulars to the series such as Play-Yan, the Monkeys, Karate Joe, etc. A sequel, Rhythm Heaven (Rhythm Tengoku Gold in Japan) was released for the DS, and later Rhythm Heaven Fever for the Wii, the latter of which introducing Marshal, a guide to the player who is widely viewed as the series mascot. A fourth game, which brought back many old minigames and introduced a few new ones, Rhythm Heaven Megamix, was released for the 3DS. It introduced a storymode about a bear called Tibby, who wishes to return to the Heaven World, but must partake in many rhythm-based minigames to do so.

For a game series based on something so simple, it has a surprising amount of feats. Whilst some characters, such as Microbes and Small Monkeys are Below Average Human level due to their small size, others demonstrate impressive power, such as the Wandering Samurai, who can cut Evil Demons that are comparable to him in size cleanly in half.

Whilst relatively humble in power, their speed feats are impressive, with Black Ninja being able to react to and slice arrows. Lifting Man’s Rocket Horse has also shown incredible speed, reaching Massively FTL+, however this is not common for the rest of the verse. With a generous amount of hax to their name, an ability that stands out is the “impeccable sense of rhythm”, which almost all characters demonstrate (this was first noted on in-game for Play-Yan, and can be seen in many other characters), as well as Broadway Force for a select few.

Mr. Game and Watch also makes a few cameos within the series.