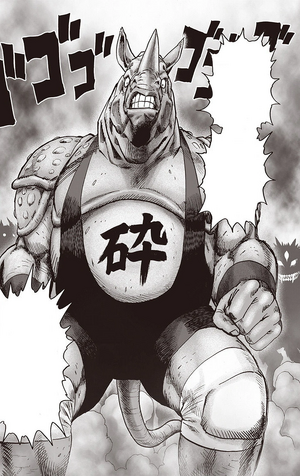 Rhino Wrestler (サイレスラー, Sai Resurā) was a Mysterious Being and a member of the Monster Association who first appeared during the attack in S-City.

Attack Potency: Small Building Level (As a Tiger level threat, should be superior to Piggy Bancon) | Multi-City Block level (Was overpowering Iaian during their fight)

Lifting Strength: At least Class 5 (Used several chained up monster truck tires as a punching bag and destroyed them all with a single attack, each tire weighing at least 800-900 lbs), likely higher | At least Class 25 (Should be superior to a Tiger-level seafolk who can casually lift a trailer truck)

Weaknesses: Extremely cocky and doesn't think twice before fighting an opponent who is far more powerful than he is.

Retrieved from "https://vsbattles.fandom.com/wiki/Rhino_Wrestler?oldid=6154186"
Community content is available under CC-BY-SA unless otherwise noted.