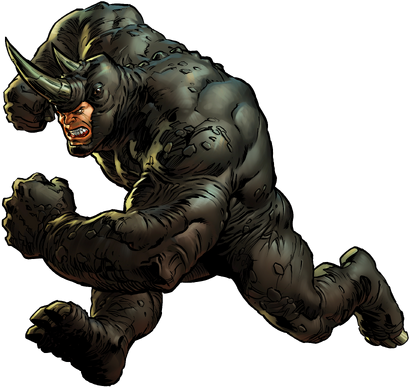 Aleksei Sytsevich was an ordinary member of the Russian mob up until he decided to undergo experimental gamma ray treatments to pay for his family's immigration to the US. The gamma rays gave him super speed, durability, and strength. In addition, he was given an armored suit with a horn to make him even more dangerous. Rhino became a superpowered thug for hire, and clashed with many superheroes, notably Spider-Man. Despite his brutish demeanour, Aleksei is actually a tortured soul, stuck to his suit and reputation when he himself wants to lead a normal life. As such, recent years have him even team up with other superheroes for a temporary alliance.

Stamina: High (He can physically exert himself to his peak for 24 hours before he begins to fatigue)

Weaknesses: When charging he has trouble stopping himself and changing directions