VS Battles Wiki
Register
Don't have an account?
Sign In
in: Characters, Star Wars, Movie Characters,
and 27 more 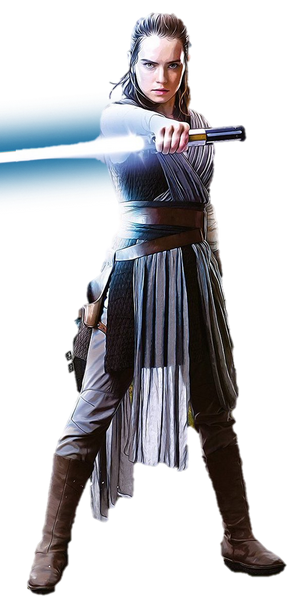 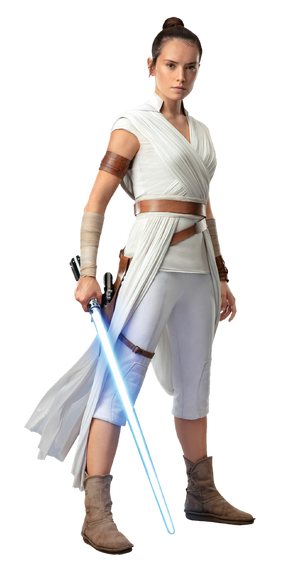 Rey Skywalker is a human female scavenger who discovered her latent Force-sensitivity while on a quest to find the legendary Jedi Master Luke Skywalker and bring a new hope to a galaxy on the brink of war. She is one of the new characters of the series, and is the main protagonist of the sequel films, having debuted in Episode Vll: The Force Awakens.

Powers and Abilities: Peak Human Physical Characteristics to Superhuman Physical Characteristics, Capable fighter with a variety of weapons (lightsaber, quarterstaff, blasters, etc), capable pilot with any spacecraft (including even the famous Millennium Falcon), is able to use the Force and utilize several abilities such as Precognition, Telekinesis, Telepathy, Mind Manipulation, and Psychometry, Elemental Manipulation (In the form of Force Lightning), Healing

Attack Potency: Small Building level naturally (At least as strong as Finn as proven by the fact that she could quickly overpower him). Small Building level with NN-14 (Heavy blaster pistols pack this kind of firepower per shot). Unknown with Force powers (After embracing the power of the Force, was able to duel and defeat Kylo Ren while he was severely wounded and weakened in the Force after murdering his father, who was still powerful enough to quite easily defeat Finn, even with a lightsaber). Should be able to cut characters/armors with durability similar to that of General Grievous and the AT-AT walker with Luke's lightsaber | Large Town level (Luke Skywalker described her power as so immense and raw that it scared him and reminded him of Ben Solo, previously his student, who had a similar connection to the Force; this was proven somewhat correct when Rey stalemated Kylo Ren in a telekinetic Force struggle for Anakin Skywalker's lightsaber in their second confrontation, leading to the lightsaber being broken in half) | At least Large Town level (More powerful than before. Accidentally destroyed a First Order Transport, which is larger and more durable than a Maxillipede shuttle), at least Island level with spirits of dead Jedi (Was aided by the spirits of many dead Jedis, including Luke Skywalker, his father Anakin, Obi-Wan Kenobi, Yoda, Qui-Gon Jinn, Ahsoka Tano, Mace Windu, Luminara Unduli, Aayla Secura, Kanan Jarrus, and Adi Gallia, to the point where she blocked and deflected Darth Sidious' Force Lightning at him, destroying him). Can cut those with durability similar to General Grievous and AT-AT with her lightsaber

Lifting Strength: Peak Human naturally. Likely Superhuman with Force Amplification. Class M with telekinesis (Lifted a great deal of rock towards the end of the Battle of Crait. Pulled back a flying First Order Transporter. Should scale to Kylo Ren)

Range: Extended melee range with quarterstaff and lightsaber. Dozens of metres with an NN-14 blaster pistol.

Standard Equipment: Her quarterstaff, NN-14 Blaster (given to her by Han Solo), a lightsaber once owned by the late Anakin Skywalker and his son Luke Skywalker, Her own Yellow-Bladed Lightsaber

Intelligence: Throughout the movie, Rey has been shown to be of great intelligence. She has lived almost her entire life living on the Junkfields of Jakku, where she had honed her skills in survival in addition to having stayed in peak-physical condition, traverse various downed star cruisers and other pieces of war tech, and even learning languages of other beings such as that of Chewbacca's and BB-8's. Rey has also been shown to be an amazing mechanic of sorts, knowing the in's and out's of how machinery works and has displayed an understanding of even the Millennium Falcon itself, making her skills rival that of Han Solo. After having encountered Luke's Skywalker's lightsaber, Rey has also potential in the Force. Despite not having been trained in its power after having them awakened, she was capable of resisting Kylo's attempt to probe her mind to the point of being able to use it and against him and exploit his own fears. She was also able to use yet another force technique by mind-tricking a stormtrooper into unshackling her restraints after only a few tries. Towards the end of the movie, Rey's skill and power over the force grew considerably, being able to out force Kylo Ren when they were going for Luke's lightsaber and being able to repel his attacks during their battle.

Weaknesses: Is not fully trained in the use of the Force or the Lightsaber, as she is just getting used to using them.

Key: The Force Awakens | The Last Jedi | The Rise of Skywalker | All of the Jedi