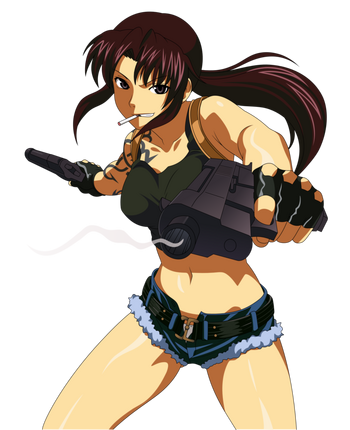 Revy (レヴィ), sometimes referred by her full name Rebecca (レヴェッカ), is the female protagonist of the series. She does most of the fighting for the Lagoon Company. Very little is revealed about her past, although portions can be pieced together through the series. Revy is a Chinese-American born and raised in Chinatown, Manhattan, near Mott Street, spending most of her youth as a thief and murderer. Flashbacks throughout the series reveal that Revy may have honed her skills with firearms by shooting at cans, and that her first murder may have involved shooting an unknown man while using a pillow. It is unknown whether the pillow was used to suppress the noise or to help avoid looking at her first victim.

The man who was shot was Revy's father, because she was fed up with her father.

Revy is very competitive, easily bored, and extremely ill-tempered. Unlike Rock, she is undiplomatic, believing in the use of brute force and coercion to get her way. In contrast to this, she's revealed to be highly ticklish.

Revy is a merciless and sadistic killer, without a conscience, who will kill anyone at the slightest provocation, even unarmed civilians (as seen in episode 6). Dutch once made reference to University of Texas shooter Charles Whitman in describing Revy after she slaughtered the crew of the Neo-Nazis' boat after a previous conversation with Rock brought up some unpleasant memories, resulting in an internal fit of rage - she even threatened Rock with death if he ever questions or tampers with her way of life. Of all the characters in the series, Revy uses the most foul language. She takes maniacal glee in killing anyone and everyone. She is also a heavy smoker and drinker.

She has a changing but volatile attitude towards Rock; though she respects him later in the series, she is mostly hostile towards him. She shot Rock at point blank range, but he moved her gun at the last second, during a confrontation in episode 7, and in episode 1 emptied most of a magazine in his direction while arguing with Dutch about their hostage. However, she does have a tendency to save Rock from critical situations, and later on she admits to considering Rock as family to Balalaika. It is possible that she has an attraction to Rock, based on her reactions to Eda's teasing, which appear to be jealousy.

According to CIA agents on Basilan Island, towards the end of episode 12, Revy is still notorious in the NYPD, particularly at the 27th Precinct. Since the 27th Precinct does not exist in real-life New York City, this throwaway reference may - or may not - indicate an odd connection to Dick Wolf's Law and Order franchise. This is further suggested in a later episode, when Revy specifically mentions the series.

Revy is one of the deadliest fighters in the series, whose skill with firearms and ability to dodge bullets is almost superhuman and unparallelel. There are only a few other characters, such as Roberta and Ginji, that can hold their ground against her in combat.

Her weapons of choice are a pair of modified Beretta 92FS's; which are made out of stainless steel and had their barrels extended from 4.9" to 5.9" each (the 5.9" is the combat MOD barrel) and also adapted for silencers. They are engraved with "9mm Sword Cutlass" on both sides, as well as the Jolly Roger of the infamous pirate Calico Jack (which is also inlaid into the ivory grips), and a manufacture inscription in Thai. Due to her ambidextrous marksmanship skills, she is nicknamed "Two Hand" by the denizens of Roanapur. However, Revy has been seen using a variety of other firearms.

Constantly living on the edge of life, Revy has developed a rather bleak, almost nihilistic outlook on life, relying only on her own power, skills, and money. She does not believe in God or emotions. However, she seems to respect and trust her companions.

Attack Potency: Wall level. Up to Building level depending on her equipment

Speed: Peak Human with Supersonic reactions (Able to dodge intense gunfire with ease, can effectively fight superhumanly fast people and to some extent even a bullet timer)

Striking Strength: Wall Class (Can fight Roberta in a punch-out contest to a standstill)

Range: Extended melee to several dozen meters (Depends on the weapon she uses)