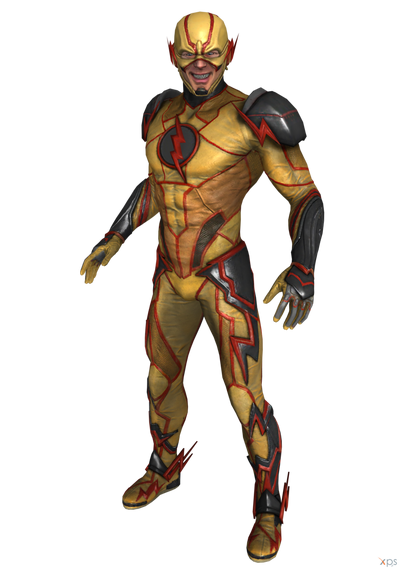 Eobard Thawne hails from the 25th century. A brilliant but sociopathic scientist, Thawne harnesses a corrupted version of the Speed Force, one that allows him to run through time itself. He uses this power to torment the present-day Flash, Barry Allen, going as far as to murder Barry's mother.

In the story of Injustice 2, he travels back to the past in order to antagonize Barry once more after he returned to battle as the Flash. Unfortunately, because of a temporal paradox created by the death of one of his ancestors by the Regime, he is no longer able to return to his own time. For the time being, he has joined forces with the Society.

Attack Potency: Small Country level (Comparable to Flash and fought evenly against him without much difficulties. Fought against Wonder Woman)

Speed: Massively FTL+ (On par with Barry Allen who is faster than Superman. Can run so fast that he can go back to the Cretaceous period)

Weaknesses: Same weaknesses as Barry. Can't return to his original timeline due to The Regime killing off one of his ancestors.

Retrieved from "https://vsbattles.fandom.com/wiki/Reverse-Flash_(Injustice_Composite)?oldid=5739001"
Community content is available under CC-BY-SA unless otherwise noted.