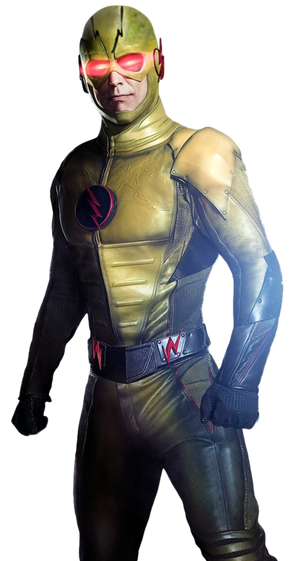 Professor Eobard Thawne (c. 2151), also known as the "Reverse-Flash", is a scientist from the future who idolized the Flash to the point that he replicated the accident to become a speedster meta-human. But when he traveled back in time, Eobard learned he is destined to become the Flash's archenemy and grew to despise the hero and attempts to prove his superiority as the Reverse-Flash. Thawne traveled back in time to kill Barry Aleen as a child, but the Flash spirited his younger self to safety with Thawne killing his mother Nora Allen out of anger. When Thawne learned he lost his connection to the Speed Force, he impersonated Dr. Harrison Wells of S.T.A.R. Labs to hasten the particle accelerator that would give Barry his powers. From there, as Dr. Wells, Thawne proceeds to train Barry so he can use him to return to his time. But Eobard ends up being erased from time when his ancestor, Eddie Thawne, killed himself to stop him. But temporary echoes of Thawne exist as part of the Flash's timeline.

After killing Nora to negate the Flashpoint Paradox caused by the Flash removing him from that moment in time, an earlier version of Thawne learns his timeline is threatened while being hunted by a Flash-like creature. Thawne recruits a 1980s version of Damien Darhk and Malcolm Merlyn to help him acquire the Spear of Destiny to use its power to restore his existence. The villains eventually succeeded, but Sara Lance depowered the spear and Thawne is erased by Black Flash.

Later, Eobard mysteriously resurfaced as an ally of the New Reichsmen of Earth-X. Despite originally trying to carry out the Fuhrer's request to perform heart surgery on Overgirl, he eventually abandoned them to their deaths at the hands of the Earth One heroes and Supergirl, running off to parts unknown.

Attack Potency: Small City level, likely higher (Draws power from the negative culling of the Speed Force, the opposition of the positive culling of the Speed Force. Fodderized Firestorm, Flash and Green Arrow, forcing them to depower Eobard through the use of nanites) | At least Small City level (Equal to Barry Allen. Implied to have defeated Superman in an unknown timeline, though how he accomplished this feat is left ambiguous). Can ignore durability with phasing

Speed: At least Massively Hypersonic+ (Was able to blitz Season 1 Barry Allen, and was comparable to him before he fought Trajectory), likely higher (Gave Barry Allen the speed equation), Higher in short bursts (Ran up a highway before Barry could even touch him. His Time Remnant outran Barry Allen, despite them previously being similar in speed) | Relativistic (Nearly as fast as the Flash), FTL prior to Crisis of 2024 (Fought Barry during the Crisis of 2024, and later his season 5 self)

Stamina: High, has been able to beat Barry Allen without being fatigued.

Range: Runs around in a fight and hand to hand combat.

Intelligence: Very high, was able to discover Barry Allen's entire life story and was able to track him in the 21st century.