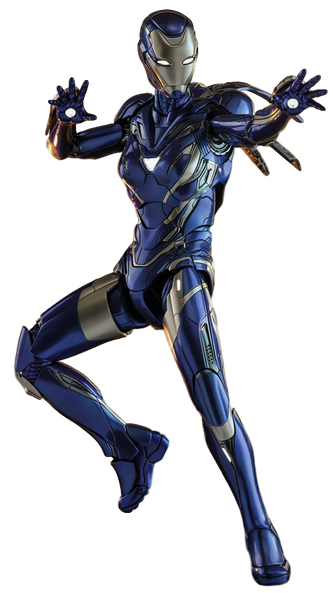 Pepper Potts was the personal assistant of Tony Stark who eventually developed romantic feelings for him. After Tony became the superhero Iron Man, she helped him defeat the Iron Monger, a former business partner of his, and Aldrich Killian, a terrorist who claimed to be the Mandarin, concurrently becoming Tony's girlfriend and the new CEO of Stark Industries, but was forced to break up with him as he had to lead the Avengers on an offensive against HYDRA. Following the Avengers Civil War, the two rekindled their relationship, eventually getting married and having a daughter, Morgan, when Tony returned from his failed battle with the genocidal alien warlord Thanos on Titan, who ultimately used a completed Infinity Gauntlet to wipe out half of all life in the entire universe.

5 years later, she directly joined in the final battle against Thanos' forces with her new Rescue armor, but witnessed her husband's death upon his sacrifice to destroy Thanos and his armies for good, with her and their daughter hosting his funeral after the battle.

Attack Potency: Large Building level (Damaged an Iron Man armor and tore its arm off) | Possibly City level (Harmed Thanos and knocked him down with an ion cannon blast, one-shotted one of Thanos' warships, the armor was likely built with technology more updated than the Mark 50)

Weaknesses: Her body could overload and self-destruct if the virus grows unstable, is frailer while regenerating, can still be killed through destruction of her heart despite regeneration | None notable