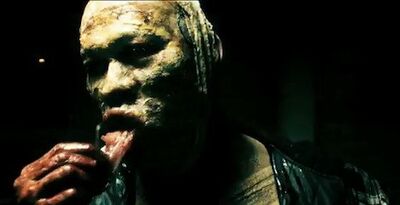 Born with the skin disorder of harlequin type ichthyosis, the man only known as Reptile was expected to live for a short time. He, however, lived on and became a notorious murder and serial killer. His calling card was ripping the heads off of his victims, eating them later.

Powers and Abilities: Superhuman Physical Characteristics, possibly some Martial Arts (Could be comparable to other Kombatants)

Speed: Athletic Human (Comparable be comparable to other kombatants)

Retrieved from "https://vsbattles.fandom.com/wiki/Reptile_(Mortal_Kombat:_Rebirth)?oldid=5393257"
Community content is available under CC-BY-SA unless otherwise noted.