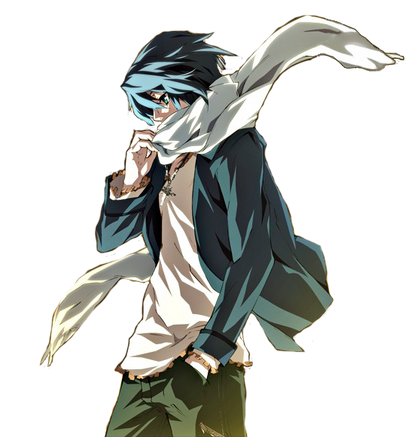 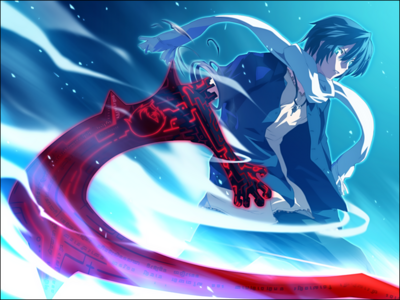 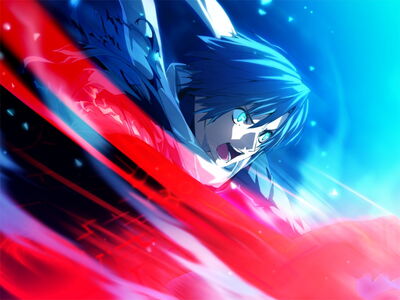 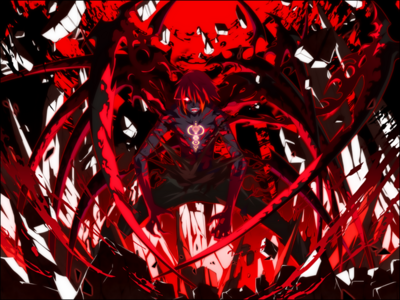 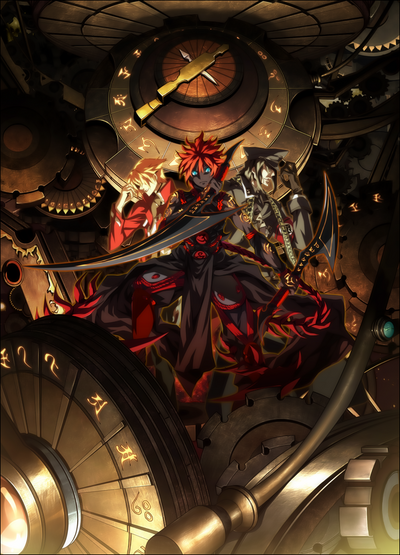 Powers and Abilities: Superhuman Physical Characteristics, Immortality (Types 1 and 3), Self-Sustenance (Types 1, 2 and 3), Regeneration (Low-Godly), Soul Manipulation, Law Manipulation (Briahs are described as the implantation of a new law into reality), Reality Warping, Magic (Ewigkeit is a form of Sorcery that fuses the Soul of its user with a Holy Relic. in addition their attacks will become magical in nature), Enhanced Senses, Extrasensory Perception (Can sense a person's breathing, heartbeat and even their mental state. Due to being an Ewigkeit user, he possess a "third eye" which allows him to see through a person's identity by viewing the color of their soul, and perceive invisible attacks), Lightning Manipulation via Beatrice's Holy Relic, Death Manipulation (Can kill the living dead and have them stay permanently dead with Eine Faust Scherzo), Time Manipulation (Can speed himself with Eine Faust Overture, and can do the same along with slowing down time around him with Eine Faust Finale), can enter a Berserk Mode, Durability Negation, Immortality Negation (All Types), Regeneration Negation (High-Godly), Non-Physical Interaction (Holy Relics are capable of hitting disembodied souls), Instinctive Reaction, Resistance to Magic, Soul Manipulation (All Holy Relic users are capable of enduring attacks that hit the soul) | Same as before in addition to Immortality (Type 10), Conceptual Manipulation (Type 1), Law Manipulation, Causality Manipulation, Space-Time Manipulation, Time Stop (Capable of even stopping time in the Throne, which lacks any concept of time), Probability Manipulation, Nonexistence Manipulation, Intangibility, Poison Manipulation, Regeneration (High-Godly; can regenerate from conceptual destruction), Acausality (Type 5), Information Manipulation, Matter Manipulation, Shadow Manipulation, Fire Manipulation, Teleportation, Telepathy, Telekinesis, Resurrection, Gravity Manipulation, Abstract Existence (Type 1), Beyond-Dimensional Existence (Type 2), Large Size (Type 11), Non-Corporeal, Cosmic Awareness, Power Nullification, can completely negate change with the Time Armor, Nigh-Omniscience, Nigh-Omnipresence (Full Omnipresence in his own territory), Summoning (Can Summon the Physical Manifestation of his Law).

Attack Potency: At least City level+, likely Mountain level (Capable of harming fellow LDO members with only regular attacks, should be comparable to both Wilhelm and Tubal Cain. Managed to trade blows and keep up with Machina during Kei’s Route) | At least Large Planet level, likely Universe level (According to Masada, Ren is capable of beating each of the Three Commanders one-on-one during Rea's Route. Masada stated that Ein Faust Finale is capable of breaking Heilige Eohl). Can ignore durability by attacking his opponent's soul or by hitting their neck with his Holy Relic | High Outerverse level (As a Hadou God, Ren exists completely above and external to all expansions of the Singularity - of which size corresponds to the inner depth of the Throne God, reaching up to infinite levels each transcending the last - which in turn utterly transcends the Multiverse, no matter the qualitative dimensions/layers it may have. To even the weakest God with 1 Taikyoku, an object that governs All Of Creation such as the Throne is nothing more than a tool. Additionally, Ren at his strongest has a Taikyoku value of 90, making him one of the strongest Hadou Gods possible)

Speed: Massively Hypersonic+ (Comparable to normal LDO members), at least FTL, likely FTL+ in his Briah (Traded 50 strikes with Reinhard in under a hundreth of microseconds which is fast via this calc. Can increase his speed to the point that lightning appeared frozen to him which showed to be this fast) | At least FTL, likely FTL+ (Is faster than the previous feats with Eine Faust Finale, also performed another feat of this scale.) | Nigh-Omnipresent normally, Omnipresent in his own territory

Durability: At least City level+, likely Mountain level (Completely impervious to anything created by mankind, including the Tsar Bomba. Can take hits from the LDO) | At least Large Planet level, likely Universe level (Comparable to the Three Commanders). Regeneration makes him difficult to kill | High Outerverse level (Comparable to Reinhard and Mercurius, and tanked several attacks from both of them. Barely survived Hajun's attack back in the events of KKK while the other Gods had perished)

Stamina: Very high | Limitless (His power comes from the Throne) | Limitless (Capable of constantly resisting Hajun for over 8,000 years while maintaining his Law)

Range: Extended melee range with the Guillotine | Anything within his line of sight is affected by his ability to slow time | High Outerversal

Standard Equipment: His Holy Relic, Margueritte Bois de Justice. Later gains the use of Beatrice's Holy Relic, Thrud Walküre, in Kei's Route. As a Hadou God, he even gains access to Relics like Anna's and Kei's, likely all others in his Legion.

Weaknesses: None notable | The more people he affects with his Briah, the weaker his power becomes. | Any being that is equal to or stronger than Ren is able to escape his time stop.

Note 1: Credits for the translation of the quote above belong to Gare.

Note 2: Despite all of the abilities shown on Ren's base stats, he does not possess all of the mentioned abilities at one time in all of the routes prior to his ascension to Hadou status (Ex. In Kei's Story Route near the end, he later has access to Beatrice's Holy Relic and the ability of use Eine Faust Scherzo. While in Rea's Route, he does not have them but instead gains the ability to use Eine Faust Finale instead). Thus, it should be mentioned in all of his Versus threads on which version of Ren from either Route is being used.

Note 3: It should be noted that during the fight between Ren and Reinhard, the former does a feat of slashing 50 times against the latter. While the localization uses tenth of a millisecond, the Japanese one uses hundredth of a microsecond, and the original version obviously takes precedence.

Note 4: The true effects of Ren's Atziluth is enforcing his own concept of “eternal stagnation” or “eternal standstill” on everything in his domain, preventing any change from occurring. While it has been described as stopping time, that is simply due to the law's resemblance to it and thus should not be treated as just stopping time.