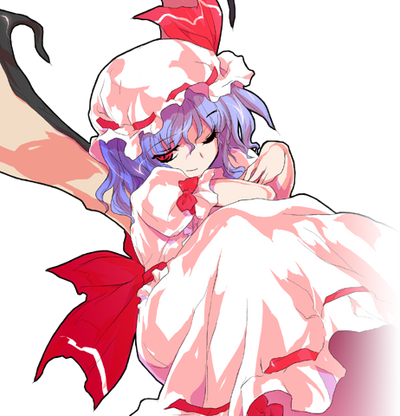 Remilia Scarlet is the head of the Scarlet Devil Mansion, the mistress of Sakuya and Meiling, a close friend of Patchouli's, and the older sister of Flandre Scarlet. While she often seems childish and non-threatening, she is incredibly strong and is known across Gensokyo as the "Scarlet Devil".

Upon appearing in Gensokyo in the past, she gathered many youkai under her charisma and went on a rampage before being defeated by a coalition of other powerful youkai, which led to the creation of the Spellcard rules.

Powers and Abilities: Superhuman Physical Characteristics, Danmaku, Flight, Magic, Blood Manipulation, Chain Manipulation, Forcefield Creation, Fate Manipulation, Summoning (Can summon and control devils), Non-Physical Interaction (Can harm Phantoms and Evil Spirits with her regular attacks), Weather Manipulation (Can release a dense mist that absorbs light and sickens humans), can transform into a flock of bats or a cloud of mist, Resistance to Mind Manipulation (Youkai can resist the effects of the true Moon, which can drive humans insane and kill them if they look at it), Immortality (Types 1 and 3), Regeneration (Low-Godly; can regenerate solely from her incorporeal "Mind". High-Mid against spiritual attacks; can regenerate from just her head)

Attack Potency: High Universe level, possibly Universe level+ (Stronger than both Patchouli and Sakuya. Stated to be the vampire from the Vampire Incident, who needed several of the strongest youkai in Gensokyo to defeat her, before the Spell Cards Rule was created. Vampires are often said to be as strong as Oni. Brawled with Marisa Kirisame on one occasion)

Lifting Strength: At least Class 25 (Vampires are said to be able to uproot thousand-year old trees).

Range: Extended melee range, at least Tens of Meters with Danmaku (Her firing range should be comparable to Sakuya's, who can throw knives at least 36 meters), Hundreds of Kilometers with Witching Mist (She spread her Witching Mist across all of Gensokyo)

Standard Equipment: Her parasol, which protects her from sunlight.

Intelligence: Remilia is cunning, perceptive, and intelligent, having amassed knowledge and wisdom over 500 years. She is also extremely charismatic and quickly picked up on Yukari manipulating her during her trip to the Moon.

Weaknesses: Remilia is burnt when exposed to sunlight or roasted soybeans, and she cannot cross flowing water, or approach a broken holly branch or the head of a sardine. She is also incredibly overconfident and vulnerable to spiritual attacks.

- Manipulation of Fate: Remilia apparently has the power to manipulate fate, although the specifics of this power have never been shown, as she has never been shown explicitly using it. Hieda no Akyuu has said that those in her vicinity seem to be followed by bad fortune, and it is said that she can greatly change a life with a single word. Flandre implies that she may be able to read the future, but dismisses this as boasting rather than anything concrete. It also seems to be linked to the red chains she uses in some of her attacks.

- Witching Mist: Remilia can release and shape a thick red mist that she can spread over a wide area. The mist itself is, according to Remilia and Patchouli, composed of minuscule, highly-dense jewels that bend light more than ordinary water droplets can. The wavelength of the refracted light drops past scarlet, and it is diffused and absorbed by the mist, giving it its distinctive scarlet coloration and its other name, the Scarlet Mist. Inhaling the mist makes humans quite ill. Remilia used it to blot out the sun so she could go outside without issue during the Scarlet Mist Incident. 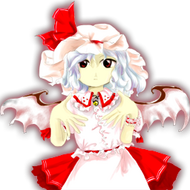 Remilia in the Embodiment of Scarlet Devil 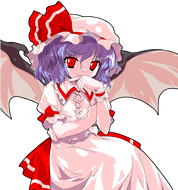 Remilia in Immaterial and Missing Power 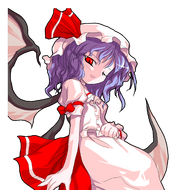