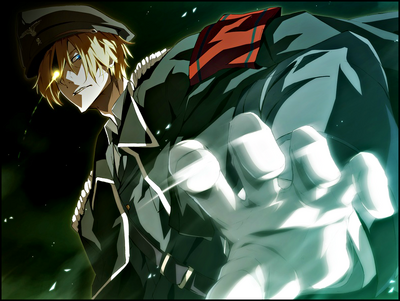 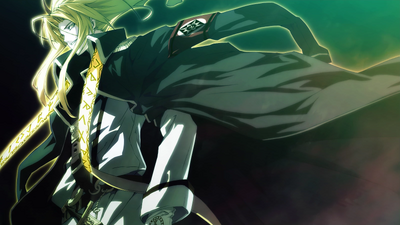 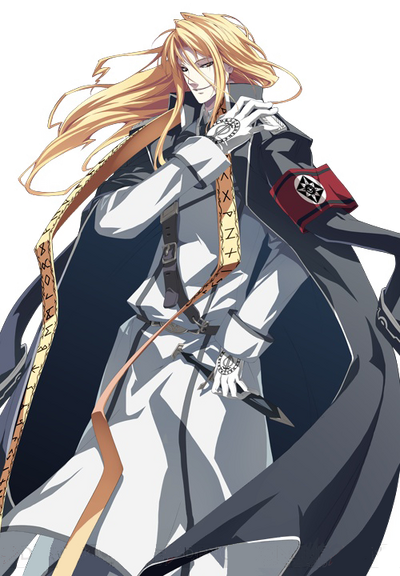 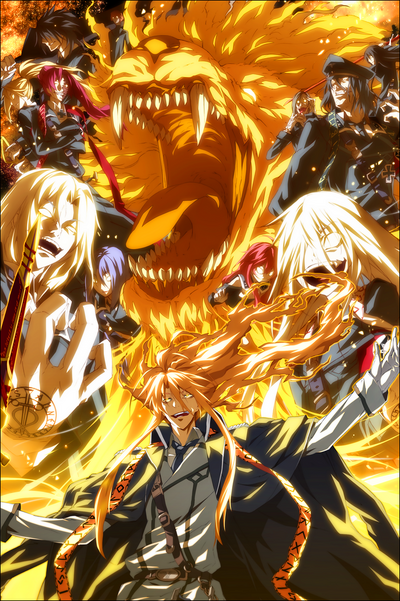 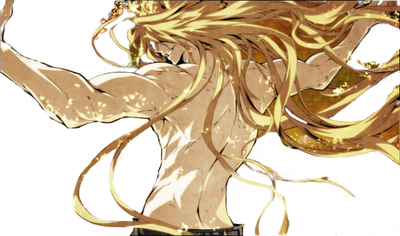 Reinhard Heydrich is one of the main antagonists of the Dies Irae visual novel series.

On the eve of Christmas in Germany during the year 1939, Reinhard, then chief of the Gestapo of the time, was in charge of handling a suspect by the name of "Karl Kraft" after the latter had predicted the attempted assassination of the Fuhrer sometime ago in the same year. While interrogating the mysterious man, Reinhard began to question his mediocre lifestyle and on his "self-restraint" with everything around him. Through Karl Krafts' words and, after watching a fight happen between four other people, Reinhard made up his mind to no longer hold back, starting off an emotion within him to rise and feel the desire to spread this to everyone and everything around him. Starting with breaking off the fight between the four people and, along with Karl and three other bystanders at the time of the incident, go on to create the most powerful and dangerous organization in the world: The Longinus Dreizehn Orden.

Years will pass after the LDO was formed and it made up of all thirteen seats formed, with Reinhard and all others having been taught in the magical system of Die Ewigkeit from Karl Kraft that allows them to get stronger through the souls of both the German Army in battles or even innocent civilians. A ritual in Berlin during the cities' battle in 1945 in WW2's closing hours was performed, where it elevated Reinhard along with his three commanders to a separate plane of reality, waiting in time for another ritual that will allow Reinhard to rise to Godhood and fight a worthy adversary and fulfill his desire to fight with all of his power.

Superhuman Physical Characteristics, Immortality (Types 8; his entire existence is completely dependent on Mercurius' existence due to being his apoptosis, and will only truly die permanently if Mercurius dies as well.), Aura (Charisma and Fear type. Rusalka, Schreiber and Wilhelm were afraid of him, to the point the last two couldn't fight or move anymore), Paralysis Inducement (His aura is capable of paralyzing others), Resistance to Mental abilities (Valerian Trifa was unable to read his mind, Reinhard is completely unaffected by the mental abilities of Mercurius)

Superhuman Physical Characteristics, Immortality (Types 1, 3, and 8; his entire existence is completely dependent on Mercurius' existence due to being his apoptosis, and will only truly die permanently if Mercurius dies as well. And he also won't permanently die for as long as his Valhalla exists), Regeneration (Low-Godly, High-Godly within Gladsheimr), Enhanced Senses, Extrasensory Perception (Able to sense souls and their specific characteristics, even at large distances), Soul Manipulation (Can damage the soul with his regular attacks, can absorb the souls of the dead and even tear away souls under the control of Mercurius, and can constantly resurrect and restore the souls of those in Gladsheimr), Law Manipulation (Briahs are described as the implentation of a new law into reality, Gladshiemr is described as the law of the new world), Reality Warping (Can enforce his deepest desire onto reality with his Briah and completely overwrite it with Atziluth), Conceptual Manipulation (The Longinuslanze deals conceptual damage and can bypass the concept of distance), Light Manipulation, Summoning (via Gladsheimr), Darkness Manipulation, Holy Manipulation, Curse Manipulation (Via the Longinuslanze), Energy Manipulation, Fire Manipulation, Lightning Manipulation, Poison Manipulation (Via Cain's Briah), Intangibility (Via Beatrice's Briah), Absorption (Via the Longinuslanze and Wilhelm's Briah), Teleportation, Invisibility, Mind Manipulation (Compelled hundreds of thousands of people to kill themselves and join his legion of souls just by talking. His Longinuslanze can make even his Legion, who all could take the sheer pressure of Methuselah darkness and fear shunting into their minds, to have trouble remaining conscious just by being in its presence), Magic, Barrier Creation, Necromancy, Matter Manipulation, Existence Erasure (Can erase anything as long as it has a history while using Machina's Briah or with the Longinuslanze, which can even erase the Law of Mercurius), Space-Time Manipulation, Can negate magic attacks, Resurrection, Durability Negation, Reactive Power Level (Can always become faster than his foes through Schrieber's Niflheimr Fenriswolf), Immunity to natural poisons and diseases, Resistance to Magic, Mental (Reinhard is completely unaffected by the mental abilities of Mercurius, and was only slightly bothered when Mercurius began to reveal his "true self"), Spiritual (Members of the Legion are capable of surviving attacks that hit on a physical and spiritual level), Spatial, Temporal (Only suffered a crack on his face from Methuselah's time acceleration and did not seem bothered by Ren's Finale Briah), Curses (should be stronger than his restricted state who was initially unaffected by Marie's curse), Conceptual Existence Erasure (Machina stated that his only weapon was as good as trash against Reinhard), Aura (Charisma and Fear type. See feats section down below), Can boost the power of any of his Legionnaire's (Was able to make Wilhelm strong enough to fight evenly with Methuselah as well as boost his resistances to the latter's abilities)

All previous abilities to a lower degree, Intangibility (Via Kei Briah), Resistance to Curses (Was initially unaffected by Marie's curse)

All previous abilities to greater extent, Law Manipulation (A Taikyoku user can impose their own Law on the world and also warp existing laws. Passive), will eventually have Soul Manipulation (Any God can affect the souls. Be it destroying it or outright absorption. Density of their soul is powerful enough to make a weaker Hadou God die from their mere presence), Reality Warping (The flood of their Law will cause reality to warp and be shaped according to their desires), Conceptual Manipulation (Any Taikyoku holder can manipulate concepts, destroy them or create new ones), Space (Hadou Gods emanation, act of causing their own color to pour into the world, affects space and time regardless of its complexity. Subjugating everything within it under their own Law), Regeneration (High-Godly; can regenerate from conceptual destruction), Information Manipulation, Acausality (Type 5), Matter Manipulation, Gravity Manipulation, Abstract Existence (Type 1) (A God embodies their own Law), Non-Corporeal, Cosmic Awareness, Nigh-Omniscience (Knows everything that will happen inside their own Law, as it is no different than being part of their being), Nigh-Omnipresence (Full (Omnipresent when in his own territory), Law Manipulation (Passive, his castle is emanating and will continue to do so until it has painted all of existence), Large Size (Type 11), Beyond-Dimensional Existence (Type 2)

Attack Potency: At least Small Building level (One shot Wolfgang and Wilhelm in quick succession, who could blow up a car during their battle) | At least Universe level (Far superior to the LDO, stronger than Wilhelm who destroyed the Jaws of Darkness. Casually one-shot Methuselah and destroyed all his mystery), High Outerverse level via hax and LLT (Gladsheimr is described as the law of the new world and a singularity that is detached from the World of Foreknowledge, as well as being described as being a power already on the Atzulith degree despite being a Briah. The Longinuslanze Testament is described as washing away the world of Foreknowledge, and like Reinhard, is the manifestation of Mercurius' desire to die), Can ignore durability in a variety of ways | At least Mountain level, higher with each swastika being open (Should be superior to his three commanders) | At least Universe level (His power has grown exponentially and beyond any power in the universe, which includes the likes of Methuselah), Word of God states Reinhard is equal to Amakasu Masahiko’s Gods summoned through Ragnarok, whom are stronger than Huanglong, who is, in turn, stronger than his Tatari self, Nakiri Kuubou) will eventually become High Outerverse level (With all eight swastikas open, Reinhard's Law begins to emanate over the entire world, with his existence becoming that of a Hadou God), Can ignore durability in a variety of ways | High Outerverse level (As a Hadou God, Reinhard exists completely above and external to all expansions of the Singularity - of which size corresponds to the inner depth of the Throne God, reaching up to infinite levels each transcending the last - which in turn utterly transcends the Multiverse, no matter the qualitative dimensions/layers it may have. To even the weakest God with 1 Taikyoku, an object that governs All Of Creation such as the Throne is nothing more than a tool. Said Throne was destroyed in the battle between Reinhard and Mercurius. Additionally, Reinhard at his strongest has a Taikyoku value of 90, making him one of the strongest possible Hadou Gods)

Stamina: Superhuman | Limitless (Reinhard's stamina did not wane even after Methuselah accelerated time at a rate of billions of years every second)

Range: Standard Melee Range | At least several kilometers (His attacks should cover similar range as Eleonore's, whose projectiles have been shown to travel this far), High Outerversal with Longinuslanze Testament, Likely High Outerversal with teleportation via Gladsheimr (Exists detached from the world of Foreknowledge, destroying its concepts of distance and coordinates) | High Outerversal

Standard Equipment: None Notable | His lance, Longinuslanze Testament (Also known as the Spear of Destiny)

Intelligence: Reinhard, as the commander of the Gestapo during World War II, is a highly accomplished tactician, general and leader, attracting swathes of followers with his sheer charisma and majesty and memorizing each and every one of them so that he can best call their abilities to the battlefield with Gladsheimr. Having over sixty years of combat experience, he is more than capable of handling all of his abilities with ease, casually beating back Ren, Beatrice, and Kei in their initial encounters. Seeing himself as "the master" and others as his "servants", he sees himself as the monarch of destruction, being unmatched in combat until his final confrontation with Ren, but even then the latter had help from Marie, a Hadou God. Due to lacking a competent rival up to this point, he is somewhat overconfident at times despite his admission that he feels that he will be defeated at some point, weakly laughing at the thought of being beaten by a few upstarts until they actually start to challenge him. In addition to his combat prowess, he is also knowledgeable regarding culture and can quote literary classics and ancient texts like the Bible with ease. Furthermore, Gladsheimr grants him access to the memories and experiences of his one hundred million legionnaires, giving him the combined equivalent of 6.1 billion years of experience on the battlefield | Nigh-Omniscient

Weaknesses: His power is restricted by the opening of the swastikas, with several of his powers, such as the undodgeable nature of the Longinuslanze Testament or it's all ending power, being sealed until all eight swastikas are opened. As a man who expresses his affection through the heat of battle and sheer destructive force, he refuses to use the Longinuslanze's effect unless he is truly irritated with how poor of a fight his foes are putting up or if he truly loves the battle he's received with them

Credits for the translation of the quote above belong to Gare.

It should be noted that during the fight between Ren and Reinhard, the former does a feat of slashing 50 times against the latter. While the localization uses tenth of a millisecond, the japanese one uses hundreth of a microsecond and due to how consistent the original game is, it's precedence take over the localization.