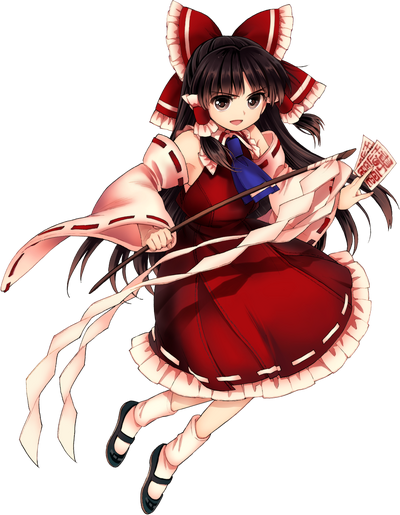 Reimu Hakurei is the Shrine Maiden of the Hakurei Shrine and the main protagonist of the Touhou series alongside her friend, Marisa Kirisame. She is exceptionally talented and gifted, but her laziness makes her hate training.

Despite that, she resolves incidents anyway, and she's friendly and gets along with everyone, including youkai. This passive attitude towards monsters doesn't sit well with most of the humans in Gensokyo, which means her shrine doesn't get many visitors... or donations.

Superhuman Physical Characteristics, Flight, Danmaku (Made up of ofuda, sealing needles, and spirit energy orbs; much of which homes in on targets), Energy Projection, Soul Manipulation (In The Embodiment of Scarlet Devil, she is said to have the power to manipulate the spirits of living things, and she can purify spirits), Non-Physical Interaction (Can harm Phantoms and Evil Spirits with her regular attacks), Forcefield Creation (Specializes in the creation of barriers, using them both offensively and defensively. She passively creates a barrier around her when she's stunned), Sealing, Spatial Manipulation (She can turn space inside out, open dimensional rifts and barriers, and prevent enemies from approaching her while making projectiles miss her automatically), Teleportation, Can create doubles of herself, Intangibility (By floating above existence, she becomes effectively untouchable, so most attacks simply pass through where she appears to be harmlessly), Physics Manipulation, Probability Manipulation and Fate Manipulation (By using the "memory" within all things, she can alter the probability of something happening, even if it goes against the laws of physics, as the "memory" layer of the world exists beyond the mental one, which in turn exists beyond the physical one, which is controlled by the laws of physics), Conceptual Manipulation (Type 1; Implied her ability to control boundaries was comparable to Yukari's), Resistance to Mind Manipulation (Was unaffected by the true Moon, which can drive humans insane and kill them if they look at it).}}

Conceptual Manipulation (Type 1; Can summon Ama no Iwato Wake no Mikoto to manipulate the fundamental boundaries between everything and the conceptual borders that exist between two things; it's been stated that without boundaries, everything would exist as a singular, massive object, not unlike the state that the world was in before Gods separated everything by giving names and concepts to them.[1][2]), Illusion Creation.

Attack Potency: Low Multiverse level (Marisa can only barely keep up with her through constant training even though Reimu is lazy and rarely practices, and according to Marisa, she can one-shot almost any youkai with Fantasy Seal. She, alongside Yukari in the Barrier Team's extra scenario in Imperishable Night, inflicted so much pain onto Mokou to where she couldn't fight anymore despite her immortality. She should be somewhat comparable to Toyosatomimi no Miko and the other religious figures) | Multi-Solar System level, likely Galaxy level (Defeated Shinki, and is comparable to PC-98 Yuuka and Mima)

Speed: Massively FTL+ (Could fly interstellar distances in the Dream World while fighting various enemies) | Speed of Light Reactions (Has fought Yumemi, who uses photon based attacks), possibly Massively FTL+ (if the stars in Mystic Square are real stars)

Lifting Strength: Class 25 (Roughly comparable to that of Tenshi)

Stamina: Very high. She maintained the summon of the Sumiyoshi Gods for twelve days straight, which required constant prayers and concentration, and she can fight against youkai all day. Tired out and outlasted Flandre in their Spell Card Battle

Range: Extended melee range, at least Tens of Meters with Danmaku (Her firing range should be comparable to Sakuya's, who can throw knives at least 36 meters), much higher with Oomagatsumi no Kami's summoning (She was going to taint all of the Lunar Capital) and Fantasy Nature (She floats "above" reality to become untouchable to regular attacks), Low Multiversal with Spatial manipulation (Managed to bring her physical body to hell)

Intelligence: Reimu is a skilled fighter with knowledge on many youkai, gods, and other spiritual beings. She is also extremely perceptive. She has an innate knack for using her powers, even those she doesn't fully understand, weaving them into her movements and attacks without fully realizing or intending to do so. She is incredibly knowledgeable when it comes to barriers, and is capable of analyzing and dismantling barriers that neither Marisa or Patchouli could understand. While she is exceptionally talented, she is also very lazy

Weaknesses: Reimu is incredibly lazy and thus hasn't reached her true potential, instead of relying on her sheer talent. She hasn't mastered the ability to summon gods yet, for example

Ability to Float: While flight is widespread among inhabitants of Gensokyo, Reimu's ability extends beyond that, encompassing not only more complex techniques but her behavior in life. She merely casually floats through life and is so in touch with her surroundings that she has been likened to a hermit. As long as she "goes with the flow," she showcases both incredible intuition and luck, though she loses her edge when she is distracted or acting on selfish desires. She has been observed to dodge attacks as if she were made of air, while, from her perspective, the projectile swerved away from her, and she has walked across a river unknowingly without getting wet by stepping on fish as they leaped from the water. More notably, it allows her to accomplish things such as circling an enemy by moving in a straight line, appearing from the least probable places with no real reason, on top of teleporting short distances.

Aura Manipulation: In the omake.txt of the Embodiment of Scarlet Devil, Reimu is said to be capable of manipulating the spirits of living things, but this ability has never been mentioned again or displayed at all.

Barrier Creation: Reimu is incredibly well-versed in the use of barriers, having an in-depth knowledge of how they work that allows her to analyze and take down barriers that not even Marisa or Patchouli can understand with ease, such as the Netherworld's barrier. As she explains to Marisa, a barrier acts as a border between things. On top of using them for protective purposes, Reimu can also utilize them as attacks, opening them up at short distances to injure her opponents and knock them back.

Shrine Maiden Powers: As the Hakurei Shrine Maiden, Reimu can handle the Yin-Yang Orb, along with the other duties of the Shrine Maiden, such as performing exorcisms and blessings. She can invoke the Native Gods of Gensokyo into her body for various effects, but she has not practiced this ability very much and has thus not come anywhere close to mastering it.

Note: The canonicity of the PC-98 games are still debatable to this day, as ZUN both stated that the PC-98 setting still exists, but that more recent games should be taken in priority to canon. Thus, to avoid confusion, the two eras have been separated.

Reimu in the Embodiment of Scarlet Devil 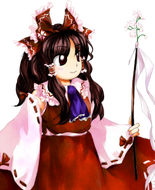 Reimu in Phantasmagoria of Flower View 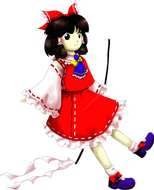 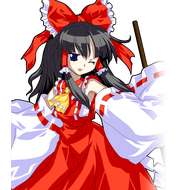 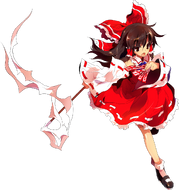 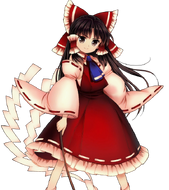 Reimu in Urban Legend in Limbo 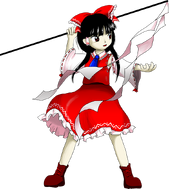 Reimu in Legacy of Lunatic Kingdom 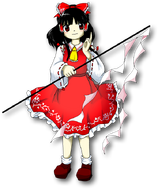 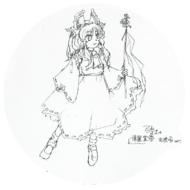 Reimu in Curiosities of Lotus Asia 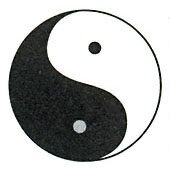 Reimu's sigil in The Grimoire of Marisa

Reimu in Highly Responsive to Prayers, her first appearance 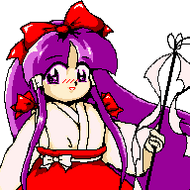 Reimu in Phantasmagoria of Dim.Dream 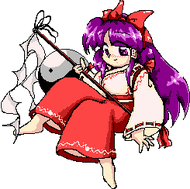