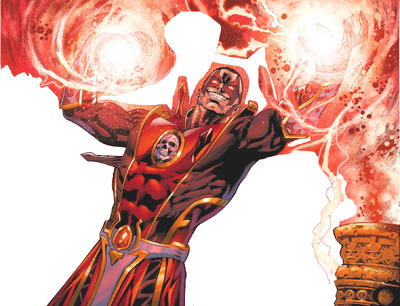 Reiko is a tactician with the penchant for brutality, he served both Shinnok and Shao Kahn, but his greatest desire was to replace the emperor. In the current timeline, he is Mileena's general in Outworld's civil war and followed the prophecy of the Cleric of Chaos Havik.

Attack Potency: Multi-City Block level (Easily defeated Jax, Ermac and Mileena who had to combine their attacks to harm him. Fought with Kotal Kahn) | Likely City level (Absorbed the energy of Raiden and other fighters. According to Nitara ending, a supposed Blood God should be this strong. He died because he was unable to find blood to sustain himself)

Intelligence: Gifted; at least a decent tactician since he's a general and predicted every move Kotal Kahn made.

Weaknesses: None notable | He needs blood in order to be stable, otherwise he will melt and die.

Note: Not to be confused with the similarly - named character from Ghost Sweeper Mikami. 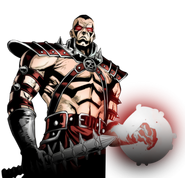 Current Timeline Reiko.
Add a photo to this gallery

Retrieved from "https://vsbattles.fandom.com/wiki/Reiko?oldid=5902249"
Community content is available under CC-BY-SA unless otherwise noted.