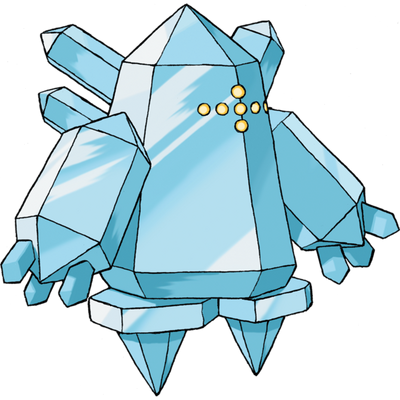 Regice is one of the three Legendary Titans of Hoenn, with a heavy connection to braile. Composed of ice that can only be found at the South Pole in the present day, it represents the chill of the ice age and is subservient to Regigigas who created it.

Attack Potency: Multi-Continent level (Was able to weaken Regigigas in the anime, and the Regis combined Superpower stopped the clash between base Groudon and Kyogre's attacks in Adventures)

Durability: Multi-Continent level (Can take hits from the other Legendary Titans)

Stamina: Limitless, due to not having organs to use energy on.

Intelligence: Relatively high due to age.

Weaknesses: Regice is vulnerable to Steel, Fighting, Rock, and Fire-type attacks. However, for its fire weakness, its Pokédex entry states that its body cannot be melted by neither fire nor lava.