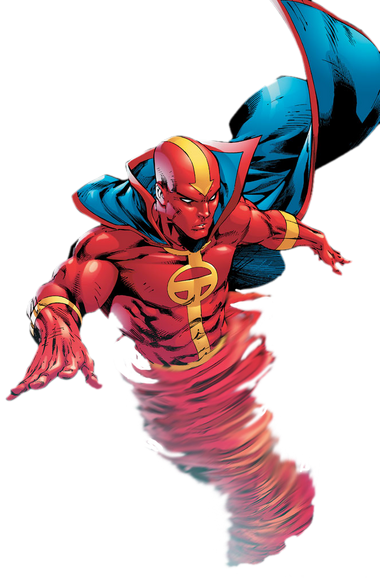 When the alien elemental being Ulthoon, who consisted of a good personality (the Tornado Champion) and an evil personality (the Tornado Tyrant), was defeated by Adam Strange on Earth-One's planet Rann, he contemplated morality and agreed that good was greater than evil. He decided to split himself into his two personalities, who then proceeded to immediately battle each other, and the Tornado Tyrant emerged victorious. The defeated Champion wandered the cosmos until it discovered an android body created by T.O. Morrow. He took control of the body, but during the process it short-circuited and erased Tornado Champion's memory, leading to him re-identifying himself as the eventual Justice League member Red Tornado.

Attack Potency: Solar System level (Created winds too powerful for an Amazo with the powers of the entire main Justice League to overcome, blasted the entire Crime Syndicate away with one attack, overpowered Despero with his air blasts)

Speed: Massively FTL+ (Outsped Black Racer and stated by Jay Garrick to be faster than himself)

Durability: Solar System level (Survived a beating from Despero, can take attacks from Superman and Superboy)

Stamina: Extremely High due to being an android

Intelligence: Extraordinary Genius (His memory contains at least hundreds of millions of terabytes worth of information, including such from the Justice League's databanks and records. He was also able to reverse-engineer technology that functioned based on different laws of physics than the regular universe.)

Weaknesses: Can be shut down if a fail-safe device on his neck is hit hard enough, vulnerable to being hacked and reprogrammed