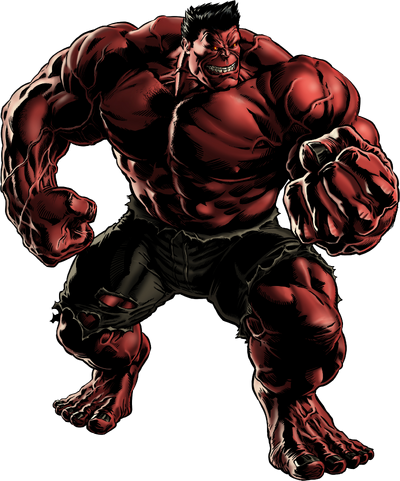 General Thaddeus E. "Thunderbolt" Ross, the man who would become the most frequent nemesis of the superhuman monster known as the Hulk, born into a family with a proud tradition of military service. As a boy, Thaddeus Ross immersed himself in the study of military history. Later he learned how to fly by barnstorming at county fairs.

Later on in his life, Ross was transformed into the Red Hulk in order to combat his nemesis more effectively.

Powers and Abilities: Superhuman Physical Characteristics, Regeneration (Mid), Can create massive shockwaves with thunderclaps, Immune to nuclear and radiation-based attacks, Resistant to transmutation and other such matter manipulation powers, Can absorb radiation and cosmic energy to turn stronger, Can generate intense heat, Immortality (Type 1, 3 and 4)

Speed: Massively Hypersonic+ jumping speed (Can jump to the Moon and back in a brief period of time) with at most Massively FTL+ reactions (Comparable to Hulk)

Standard Equipment: Thunderbolt is known to use large guns from time to time.

Weaknesses: He turns weaker if he is exposed to Negative Zone energy. If his body turns too hot he becomes disoriented.