VS Battles Wiki
Register
Don't have an account?
Sign In
Advertisement
in: Verses, Manga, Record of Ragnarok 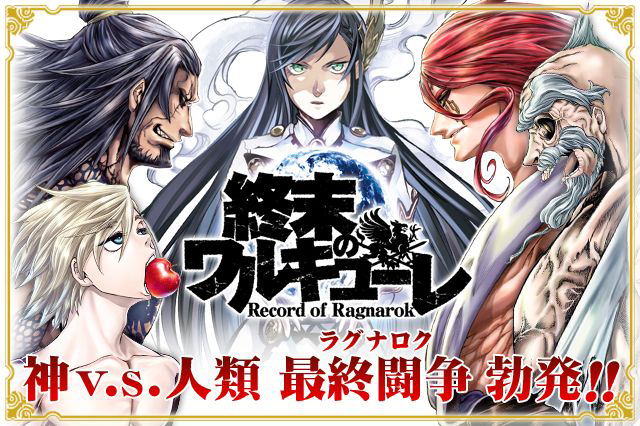 For detailed information about this series, visit the Shuumatsu no Valkyrie: Record of Ragnarok Wiki.

The Gods have decided: the Apocalypse must be brought down upon Humanity for their excess hubris and unappealing natures. A unanimous vote is cast in favor of destroying Humanity, the vote being interrupted by a lone Valkyrie who politely points out Humanity is entitled to Ragnarok, a series of 1v1 fights, God-against-Human until 7 Victories are achieved for either side. If Humanity wins, they are saved for 1000 more years. If they lose, the Apocalypse occurs.

A Japanese manga by Takumi Fukui, Record of Ragnarok tells the tale of one Valkyrie and her sisters seeking to undermine the Gods themselves by assembling the greatest heroes from across all of time for Humanity, including Adam, Lu Bu, Nikola Tesla, Rasputin, and more to face off against and kill the likes of Zeus, Buddha, Indra, Odin, and several other deities, with the loser of each round having their very soul obliterated.

As expected of a solely-tournament-arc manga showcasing the Gods from their mythos facing off against the mightiest warriors of Earth, the verse is notably high-powered right out the gate. Thor's felling of the world-encompassing serpent in a single blow from the Poetic Edda is explicitly stated to have occurred, Lu Bu has been seen to split the sky itself with a single swing, and the destruction of Heaven itself was thought to be possible via Zeus going all out. Speedwise, Zeus and Adam have shown that Relativistic and FTL speeds are possible, with Ares commenting that any strong God would be able to keep up at the Relativistic pace.

With regards to hax, the verse is primarily-skill-based. Mental image-training to the point of analytical precognition is possible, and training oneself to attain a strike that halts time has occurred. In regards to 'conventional' power, Adam has showcased the ability to copy any power or physical strike he witnesses and perform it to a superior degree than the original, activating his ability even in stopped time.

The verse will undoubtedly continue to become even more powerful, considering all this has been achieved after only three fights.