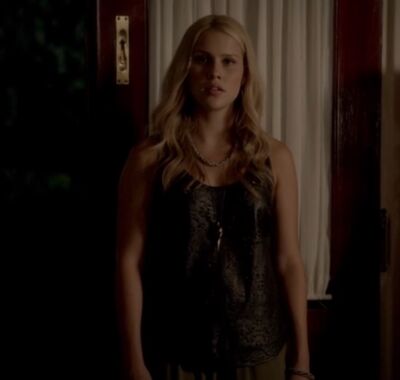 Rebekah Mikaelson is the only female Original Vampire in her family and one of the only ones in the entire The Vampire Diaries/The Originals universe. She is a proud, strong, and independent female character that has allowed her to grow and thrive in virtually any environment but she's also a bit of a free-spirit and hopeless romantic which can put her on a warpath with her half-brother Niklaus. Despite this she shares the closest relationship with him among all of her other siblings. She along with Elijah were the only ones to make the pact of family "Always and forever". Words she lives by and will kill to protect.

Powers and Abilities: Superhuman Physical Characteristics, Immortality (Types 1 and 3), Regeneration (High-Mid, Comparable to her other siblings, regenerated after being blown up in a parking lot explosion), Mind Compulsion (Can control an individual into doing their bidding after making eye contact, Original Vampires are capable of compelling other vampires as well), Limited Empathy Manipulation (Can compel an individual into ignoring or turning off their emotions by "compulsion"), Illusion Creation, Emotion Manipulation (A vampire can shut off their own emotions effectively becoming an being without humanity, though a very powerful emotional shock can turn them back on), Telepathy (Can get inside the minds of individuals and look for information through physical contact), Dream Manipulation (A vampire can both produce and modify dreams, create nightmares and lucid dreaming, as well as distort an individual's perception of reality effectively trapping someone in their dream.), Resurrection (Any vampire can resurrect themselves if they were to drown or die due to oxygen deprivation, but they will die all over again if the reason they died in the first place isn't changed to something more favorable, effectively creating an endless cycle of life and death), Accelerated Development (Passive. Original Vampires grow stronger with age.), Corruption (Vampires are able to turn humans into vampires with their blood), Enhanced Senses, Resistance to Mind Manipulation (Vampires have been shown to have limited resistance to other vampire's compulsion and require them to be severely weakened in order for them to be manipulated)

Attack Potency: Small Building level (Is comparable to her other siblings, Has faced off and damaged her brother Niklaus before, Is considered the strongest female immortal in the entire Vampire Diaries/Originals universe with the exception of one other; the deceased Amara)

Speed: Hypersonic (Is comparable to most of her siblings, far faster than any normal vampires)

Intelligence: Above average (Has over 1000 years of combat & survival experience, Was able to avoid the pursuit of her brother Niklaus for years without capture)

Weaknesses: Standard Original Vampire weaknesses (Fire, Vervain, Werewolf Bite, The bite of a "Beast", Invitation, Being stabbed with a wooden object through the heart (though being stabbed in this way will not kill an Original Vampire but will render them in a dead-like state for several hours, though Elijah has been shown waking up in shorter amounts of time), Decapitation (Unlike a normal vampire an Original Vampire will heal if their head is removed), Heart extraction (An Original Vampire cannot be killed by this mean though they will enter a death-like state as their bodies regenerate a new one)