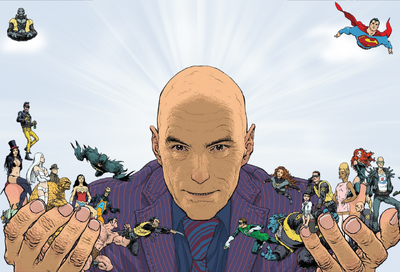 Within the constraints of fiction itself there can be any number of differences between fiction and reality, but this is not necessarily something particularly impressive by our standards. We still have to evaluate the characters by their respective feats and definitions. For example, Azathoth, The Law of Identity, and Featherine Augustus Aurora are able to look at beyond dimensional structures as mere fiction. This qualifies them as much higher tiers than, for example, Mister Mxyzptlk, who is strictly able to look at 3-Dimensional reality as mere fiction.

Author avatars and significant 4th wall breaking instances should be evaluated on a case-by-case basis, as not all of them are equal in merit and significance. Likewise, a few general rules of thumb should be adhered to:

Firstly, no matter what the author's intentions are, fiction and reality can never fully interact. The real world, and real people can be simulated within fiction, but they will still be fictional representations and characters. As such, no fictional character can be responsible for the creation of "The real world".

Secondly, Author Avatars are not inherently bad, as some fictions use them in meaningful and relevant manners. There are several games in which the player is a part of the story proper, as well as numerous stories in which the author is made present, either through an avatar or fictionalized portrayal. We have to see if the author avatar is relevant, or if it is just a wink towards the audience.

Thirdly, Author Avatars do not equate tier 0 boundlessness, and characters beating/killing their authors are not quantifiable nor meaningful feats. For instance, while The Lord of Nightmares beat her writer with a shovel, said "writer" was still a fictional character, and in no way, shape or form can LoN affect real people, or actually defeat her real world writer. Similarly, no one should look at real life humans as a "tier 0 species", simply because we can write stories.