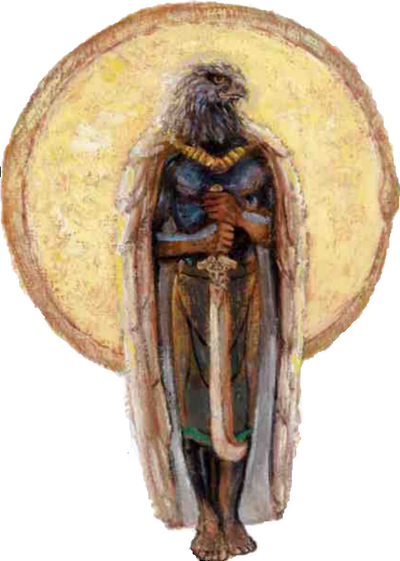 Re-Horakhty (formally Horus) is the leader of the Pharaonic pantheon who controls the solar barge as it travels across the Astral Plane. Originally Horus, he fought his Uncle Set for control of the pantheon after Set kill his father Osiris. After winning the battle he fused with his great-great-grandfather Re and ascended as the ruler of the pantheon.

Attack Potency: Planet level (Capable of battling the Leviathan, which would have destroyed the world should it awakens) | Low Multiverse level (defeated his Uncle Set who was an Intermediate Deity at the time) | Multiverse level+ (Considered to be a peer of Odin and Zeus. His Divine Rank is superior to Mystra who's death reordered the Multiverse)

Speed: At least Hypersonic+, with High Hypersonic+ reactions (vastly above people who can dodge Call Lightning) | Unknown, likely Infinite (Can likely control the space-time of his own realm) | Unknown, likely Infinite (Vastly superior to time deities beneath him, able to control the space-time of his own Realms)

Retrieved from "https://vsbattles.fandom.com/wiki/Re-Horakhty_(Dungeons_and_Dragons)?oldid=5790791"
Community content is available under CC-BY-SA unless otherwise noted.