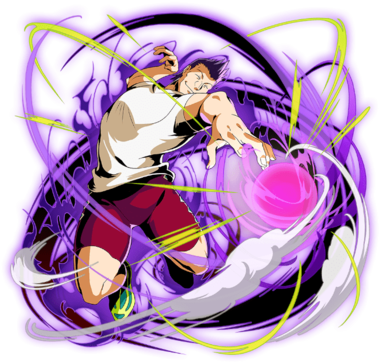 Razor (レイザー, Reizā) is one of the game masters and creators of Greed Island. He is in charge of the game's emissive systems, and as such ensures the smooth functioning of most spells. He also serves as the final boss of the quest to acquire "Plot of Beach".

Razor was a criminal in the past but was caught by Ging and given a life sentence. Ging then enlisted his help to create Greed Island. It was during this time that the two became friends and Ging told Razor about his son Gon.

Powers and Abilities: Superhuman Physical Characteristics, Proficient Hand-to-Hand Combatant, Nen Manipulation (Emitter; Razor is a very powerful Nen user. He can use all the basic and advanced techniques. He controls all the emission systems in Greed Island therefore he is the reason why most of the spell cards function), Flight (Causes all the flight spell cards to function), Energy Projection (Razor is an emitter. He is able to emit his aura in the form of a highly destructive red orb, he can also create and summon eight anthropomorphic Nen Beasts, which he calls Devils), Fusionism (Razor's Nen beasts can combine to create a more powerful beast), Teleportation and BFR (Razor causes all the emission systems to function therefore he transports players to the Island. With the card Eliminate, Razor can banish people from Greed Island)

Attack Potency: Multi-City Block level+ (Goreinu believes he is stronger than Gon, Killua, Biscuit, Hisoka and anyone else in their alliance. Phinks and other members of the Phantom Troupe decided to leave instead of fighting him. Casually destroyed a boat with a single spike. Ging Freecss acknowledged his strength, as did Biscuit Krueger and Hisoka. His ball throws are comparable to Gon's Rock. One of his Nen Beasts were able to harm Hisoka with a Shu-enhanced dodge-ball)

Speed: High Hypersonic+ (Razor is able to throw the ball so fast that the likes of Killua, Biscuit, and Hisoka have trouble keeping up)

Striking Strength: Multi-City Block Class+ (His throws are comparable to Gon's imperfect Rock. At full strength, he is able to match a full-powered Rock in power and required the combined efforts of Gon, Killua, and Hisoka to catch it. A ball redirected by Razor pushed Hisoka's Bungee Gum to its limits)

Durability: Multi-City Block level+ (Took little damage after receiving Nen powered dodge-ball from Gon and managed to redirect the ball after being hit by a full-powered Rock from Gon)

Stamina: Immensely High. As a Game Master, he is deemed to be far superior to most Pro Hunters, who in turn are far superior to those who take the Hunter's Exam, which involves running over 80 kilometers across different terrains. Razor is a highly skilled sportsman, and excels at any sport, be it throwing, passing, catching, etc. Threw several balls at the same level of an imperfect Rock and used Ko at least three times without showing any signs of fatigue.

Standard Equipment: An Eliminate Card, which can only be used by a Game Master such as himself.

Intelligence: Above Average. He is an extremely skilled sportsman and Nen User. He is experienced enough to instantly determine which ones were the filler in Gon's alliance, and also realised why the group was throwing their matches the first time around. His skills are such that Biscuit was impressed by his timing and his technique, which were described to be perfect.

Weaknesses: He is unable to draw out his full power while his aura is split among his Nen Beasts. Zetsu involves keeping one's aura exclusively in the body, it makes a Nen User more vulnerable to physical and nen attacks, because one doesn't have any aura on the outside of one's body to protect oneself.

Nen: Razor is a powerful Nen User being able to use all the basic and advanced techniques. 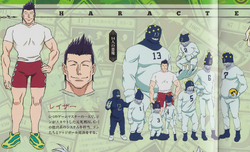 Razor in the past

Razor and his Nen beasts

Killing Bopobo
Add a photo to this gallery