VS Battles Wiki
Register
Don't have an account?
Sign In
Advertisement
in: Characters, Pokemon, Legendary Pokemon,
and 44 more

Rayquaza (Japanese: レックウザ Rayquaza) is a dual-type Dragon/Flying Legendary Pokémon. Along with Kyogre and Groudon, Rayquaza is a part of the weather trio, serving as its trio master who soothes the conflict between Kyogre and Groudon.

Age: Hundreds of millions of years

Attack Potency: At least Planet level+, likely higher (Overwhelmed both Primal Groudon and Primal Kyogre. Easily superior to even Attack Forme Deoxys, managing to vaporize its body with regular attacks several times) | At least Galaxy level, possibly High Universe level (Vastly superior to its base. Effortlessly destroyed the Grand Meteor Delta, which would completely obliterate the planet. Stomped Deoxys, destroying even its Psycho Boost with no difficulty at all. Should be immensely stronger than Mega Mewtwo X/Y, as its base performed much better against Deoxys than Mewtwo did)

Stamina: Extremely high (Rayquaza has lived for hundreds of millions of years in the ozone layer and remained very powerful throughout those times, even directly fighting against Groudon and Kyogre)

Intelligence: High, as it knows when balance is endangered, it can communicate with both Groudon and Kyogre, and is attentive to its surroundings of humans and other Pokémon.

Weaknesses: Supposedly Rock, Dragon, Fairy, and especially Ice Type moves. Although it's uncertain how effective they truly are, given that it is paired off in a trio with Pokémon that have ignored aspects of the elemental cycle. Outrage leaves it confused although it will eventually snap out of it. | Apparently only Ice, Dragon, and Fairy Type moves thanks to its ability Delta Stream, which negates its weaknesses on behalf of its Flying Type. The Outrage weakness still applies. 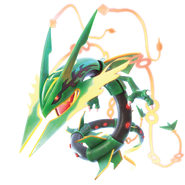