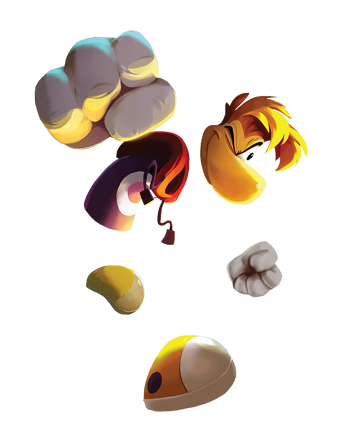 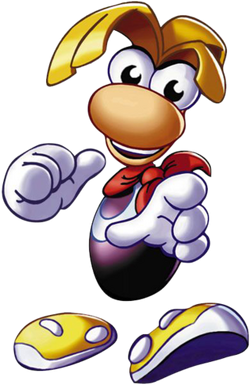 Rayman is the main protagonist of the video game series of the same name, created by Michel Ancel for Ubisoft. He is depicted as a limbless humanoid with floating appendages, which he can throw at enemies to attack them.

The manual for Rayman 2 states that Rayman was found by fishermen, having washed up on the shore of the Sea of Lums, and won the trust of the people of the Glade of Dreams by defeating Mr. Dark. Upon collecting all 1,000 Lums in the game, the player is told that Rayman is the only being in the Glade not to be dreamt into existence by Polokus, and that his origins and the identity of his parents are a mystery. It is speculated (in the game) that Rayman could be a "chosen one" selected by all the gods of all the worlds, destined to fight against evil.

A different account is provided by Rayman Origins: the launch trailer shows him being created from moonbeams by Betilla the Fairy in the Primordial Forest, destined from creation to protect the Glade of Dreams from Dark forces. The game's manual states that Rayman was created by the nymphs, who dropped a sack of Lums when distracted by some "zombie chickens" on the way to perform the ritual, resulting in Rayman's incomplete, limbless form.

Classification: A Thingamajig, Ray-Person, Chosen one of all the gods

Superhuman Physical Characteristics, Skilled Combatant, Weapon Mastery, Vehicular Mastery, Stealth Mastery (As seen here), Self-Sustenance (Type 1; Can breathe in space like Rabbids; shown in Ray-Type Challenge minigame), Underwater Breathing (Type 2; Is able to swim the deep ocean without air), Breaking the Fourth Wall (Has shown awareness of the player in his idle animations), Body Control/Telekinesis (Is able to control his hands even if they aren't connected to his body. Molded his body into a perfectly round bowling ball), Can descend slowly by turning his hair into a chopper, Non-Physical Interaction (Can attack ghosts with his punches; Can punch clouds; can interact with Lums), Energy Manipulation/Projection (Can fire energy spheres called lums via Magic Fist), Longevity (Has lived for over 100 years without changing physically or mentally), Toon Force, Regeneration (Mid to High-Mid. Possibly Low/Mid-High; Is capable of re-attaching his body parts such as hands. Can recover from being flattened. Probably regenerated from ashes with only his eyes left), Surface Scaling (Can run up walls), Invisibility (Can make himself disappear), Size Manipulation (Via shrinking), Broadway Force (Can make defeated bosses dance), Purification (Type 2) and possible Empathic Manipulation (Can turn corrupted black lums into red lums by presumably making them laugh via Grimace), Fear Manipulation (Can sometimes scare off enemies via Grimace), Resistance to Electricity Manipulation (No-sold lightning while spinning), Limited Flight (in animated series; over pools of lava; in updrafts)

Attack Potency: Varies from Small Country level (Defeated Mr. Dark who had stolen The Great Protoon, the source of energy of The Glade of Dreams) to Solar System level (Can send Dark Teensies flying into space, passing and shaking a constellation with his charged punch)

Speed: Varies from Massively Hypersonic (Capable of dodging an onslaught of Reflux's and Mr. Dark's lightning attacks. Comparable to Murfy who can intercept lightning from Zeus) to Sub-Relativistic (Can dodge laser beams from the Rabbids' ship and Space Mama) with Massively FTL+ attack speed

Lifting Strength: At least Class K, possibly higher (Easily threw a cow dozens of meters away. Is possibly much stronger than Rabbids)

Durability: Varies from Small Country level to Solar System level (Completely unharmed by an island explosion and a fall from ground zero. Scaling off his AP, plus he has fought enemies just as strong if not stronger than himself)

Stamina: Very high (Vastly superior to Globox, who swam up a waterfall. Does not require air. Can endure being struck by lightning, falling into lava, and falling great heights)

Range: Standard melee range (Rayman is only a little shorter than a man), dozens of meters with his abilities. A bit higher with certain power-ups. Interstellar with his punches

Weaknesses: His limbs are easily detachable and the Laser Washing Powders all have time limits. Loses his powers if the Heart of the World gets destroyed.