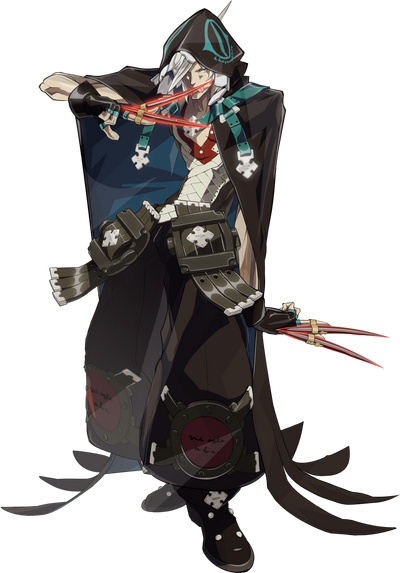 Raven (レイブン, Reibun) is a character in the Guilty Gear series. He is one of three servants of Asuka R. Kreuz, and his right-hand man. An immortal from birth, Raven's body will completely regenerate even if it's reduced to ash. He ceased aging at the moment of his first "death," and has lived for over a thousand years.

Powers and Abilities: Superhuman Physical Characteristics, Immortality (Types 1, 2, 3, 4 and limited 8; Reliant on Master Ghost, though this doesn't last indefinitely), Self-Sustenance (Type 1 and 2), Regeneration (Mid-High. He can regenerate from his ashes), Can throw needle-like projections that stun their target, Energy Projection, Statistics Reduction (Can reduce speed with his projectile), Creation (Can create various items out of nowhere), Light Manipulation (Can emit light with his Overdrive), Can disperse into feathers and create crows to attack his enemy, Fire Manipulation, Teleportation (Can teleport through great distances and various dimensions), Illusion Creation, Time Manipulation (Can create time dilation fields), Summoning (Can summon minions via the Masterghost) Resurrection (Master Ghost also allows him to resurrect in the extremely unlikely event he's killed), Can travel and attack through dimensions, Smoke Manipulation (Can create smoke that confuse even Sol's senses), Healing (Healed Jack-O's wounds), Spatial Manipulation (Able to bend and swap space), Sealing (Able to seal Ky away), Magic as Information Manipulation, Reality Warping (Stated be able to create miracles), Enhanced Senses (Can sense what's going on across dimensions), Fragrance Manipulation (Sol stated that the area smells like blood when he entered), BFR (Can send people to different places and dimensions), Limited Physics Manipulation (Able to tweak with his inertia), Resistance to Extreme Cold, Cosmic Radiations, Transmutation and Information Manipulation (Resists getting his information rewritten), Pain Manipulation and Empathic Manipulation (Pain and negative emotions are delight to him and even proactively seeking it out), Sense Manipulation, Perception Manipulation, Sound Manipulation and Fragrance Manipulation (Except for his sense of touch, none of his five senses will ever bother him, no matter what he sees, hear, smell or taste), Information Analysis, Reality Warping, Chi Manipulation and Law Manipulation (Kum stated that his threads are just too old and rusty to be normally seen and tune, his existence is zero in a sense of tuning), Material, Spiritual and Mental attacks (Resists Backyard which assaults one's body, mind and soul)

Attack Potency: Universe level, possibly Universe level+ (Stronger than base Sol and lazily caught his strike with two fingers. Fought against I-No and keep up with her without even trying). Able to ignore conventional durability in some ways.

Speed: At least Massively FTL+, possibly Immeasurable (Can keep up with Sol without issue)

Durability: Universe level, possibly Universe level+ (Tanked an attack from a bloodlusted Sol and said he couldn't even feel it, regeneration makes him hard to kill)

Weaknesses: Masochistic, will normally goad his opponents into attacking him with all they have to see if he can feel it. 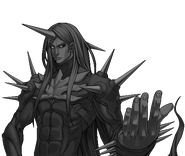 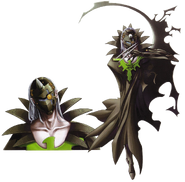 Raven in Guilty Gear 2: Overture.
Add a photo to this gallery