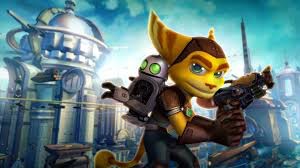 For detailed information about the series: see the Ratchet and Clank Wiki.

Ratchet & Clank is a series of action platformer and third-person shooter video games. The franchise was created and developed by Insomniac Games and published by Sony Computer Entertainment for PlayStation consoles. It is currently the best selling Sony-exclusive franchise with over a dozen games.

The games take place in a science fiction setting and follow the adventures of Ratchet (a feline-like humanoid known as a Lombax, who is a mechanic) and Clank (a diminutive, sentient Zoni robot) as they travel through the universe, saving it from evil forces that consistently threaten it. The series is noted for its inclusion of many exotic, unique and over-the-top weapons and gadgets, a concept that Insomniac Games has also expanded into their other games.

The power of the verse is pretty high as the Lombax race created a lot of high-tech weapons. There is even technology that deals with time manipulation in certain areas.