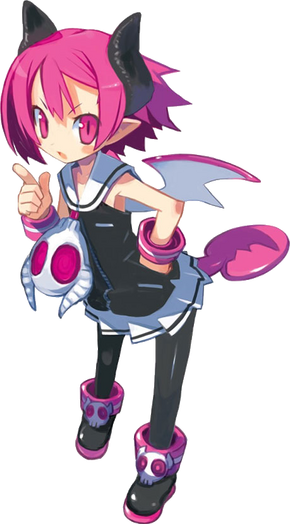 Raspberyl is Mao's closest rival, and friends. Her goal is to before the number 1 delinquent in all of Evil Academy with her friends Kyoko, and Asuka. Though over the events of Disgaea 3 Raspberyl helps Mao and the party take on Evil Academy's Senor students, Diez Gentlemen, and fight Super Hero Aurum.

After the events of Disgaea 3 Raspberyl becomes a teacher at Evil Academy, and looks to have the heart of an angel to Restore her delinquent status, after she started to act more like an Honor Student.

Intelligence: Gifted (Raspberyl has gained a great amount of academic knowledge to the point she was able to become a teacher at evil academy)

Retrieved from "https://vsbattles.fandom.com/wiki/Raspberyl?oldid=6061016"
Community content is available under CC-BY-SA unless otherwise noted.