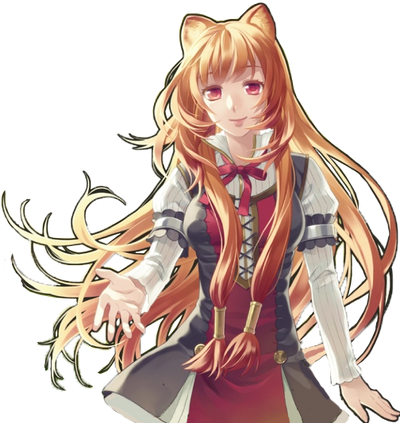 Raphtalia is the deuteragonist of "The Rising of the Shield Hero". Born into a demi-human friendly village in the country of Melromarc, which otherwise discriminates against demi-humans, Raphtalia was, as a child, sold into slavery after the village was destroyed by the wave and her parents killed. After being bought and resold, by several abusive nobles, Naofumi Iwatani bought the sick Raphtalia for a cheap price from a slave trader in order to have her fight in his stead, since his shield prevented him from dealing damage. Initially haunted by her past Naofumis care cured her both psychologically and physically, leading to her to becoming his most loyal and trusted companion and, in the end, his wife. Soon after being bought Raphtalia grows into an adult form due to level up.

Speed: Infinite, possibly Immeasurable (Can deliver thousands of strikes within 0 seconds. Stated she would deal with Medeas attacks hitting in the past by just attacking there as well)

Durability: Below Average Human (Has a defense stat of 0[3]. Could even be killed by a baby)

Stamina: Varies (Doesn't need to sleep or rest. How exhausted she gets depends on how much energy she gets from the universe)

Toffee (Star vs. the Forces of Evil) Toffee's Profile (All were Low 2-C, and speed was equalized)