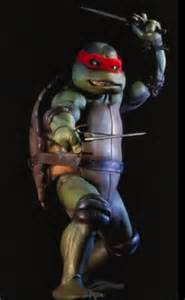 Raphael is one of the four main protagonists of the 1990's Live-Action Teenage Mutant Ninja Turtles film series. He is the short tempered and hot head of his brothers who wears a red bandana and wields twin sais.

Attack Potency: Street level (Comparable to Casey Jones who could send people flying several meters in the air with a swing, KOed highly trained ninjas with ease, most Sais like the ones he carries can gore people alive with ease)

Striking Strength: Athlete Class (Stopped a bat swing from Casey Jones with one hand and with no difficulty)

Range: Extended Melee Range (A sai grants him at least a few centimeters of extra range)