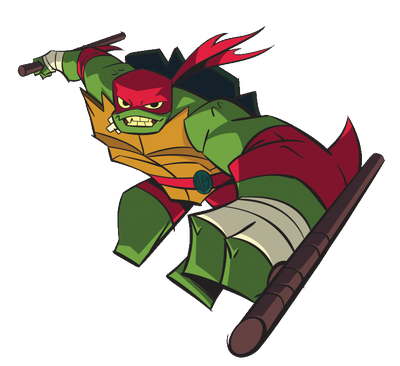 Raphael (Also known as Raph) is a main protagonist of the Television Series, Rise of the Teenage Mutant Ninja Turtles. His role being the leader amongst his brothers, despite not having strong qualities of a leader.

Powers and Abilities: Superhuman Physical Characteristics, Skilled with Tonfas and even a ladder, Martial Arts, Stealth Mastery, Energy Projection and Statistics Amplification with Tonfas (Enhance his strength and create energy extensions of his body, Energy forms can reach height of Large Size Type 1), Limited Air Manipulation (Create massive shockwaves with nothing but his brute strength)

Attack Potency: Large Town level (Capable of harming and knocking back Baron Draxum. Was able to launch a massive mass of concrete into the air by smashing the ground)

Speed: Hypersonic+ (Created a massive shockwave at this speed)

Durability: Large Town level (Withstood the force of crashing into a wall and causing a large crater)

Stamina: Superhuman (As a mutant, He is vastly superior to human's physically. Constantly gets knocked away only to get back up)

Intelligence: Above Average; Can come up with successful combat plans and usually figures out how to defeat the villain or stop their plans.

Weaknesses: Tends to crack under immense pressure, even more so when he is aware that he is cracking

Retrieved from "https://vsbattles.fandom.com/wiki/Raphael_(Rise_of_the_Teenage_Mutant_Turtles)?oldid=6169270"
Community content is available under CC-BY-SA unless otherwise noted.