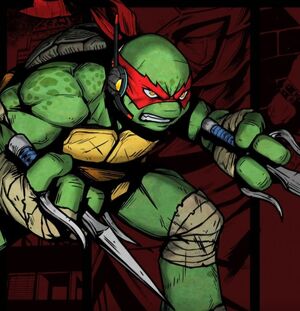 Raphael may be the strong silent type, but he never backs down from a good brawl. He's the master of stealth and can make himself invisible to enemies until unleashing a surprise attack. And when he partners with one of his Turtles teammates, the two create a shell slamming shockwave that knocks the Foot Clan off their feet.

Intelligence: Average, a bit of hothead

Retrieved from "https://vsbattles.fandom.com/wiki/Raphael_(Mutants_In_Manhattan)?oldid=6169268"
Community content is available under CC-BY-SA unless otherwise noted.