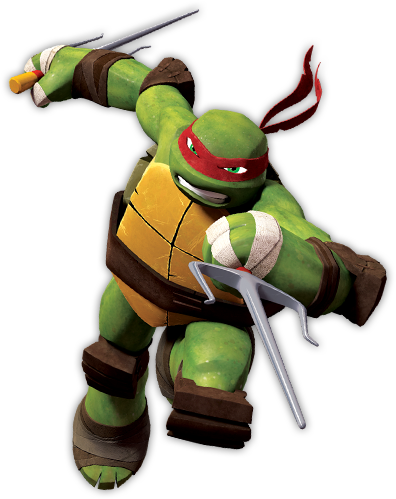 Raphael (or simply "Raph") is one of the main protagonists in the 2012-2017 Teenage Mutant Ninja Turtles television series.

Powers and Abilities: Superhuman Physical Characteristics, Martial Arts (Mastery of Ninjutsu), Weapon Mastery (Most notably with his Sais), Pressure Point Strikes, Stealth Mastery, Regeneration (Low. After the fight with Shredder he recovered from the wounds in less than day), Smoke Screen Generation (Via Smoke Bombs, which can disorient enemies by causing irritation to the eyes and clouding their vision), Can spew intense flames (With his wrist-mounted flamethrowers)

Speed: Supersonic+ (Can dodge lasers and outrun them with no trouble, has kept up with Tiger Claw)

Lifting Strength: Class 5 (Knocked bag Traag, who was several meters in size and made of Obsidian. Comparable to Leonardo, who held off Kraang Prime)

Stamina: Very High (Can fight for hours without tiring)

Range: Standard melee range, Tens of meters with shurikens and smoke screens, Hundreds of Meters with Laser Gun and Yumi

Intelligence: High combat-wise (Raphael is a highly skilled combatant having trained for years under Splinter. While his temper has been a weakness, it has also aided his fighting abilities by helping him pull off more ferocious maneuvers in combat)

Weaknesses: Has a nasty temper, though this issue diminishes after a certain point.

Start a Discussion Discussions about Raphael (2012)