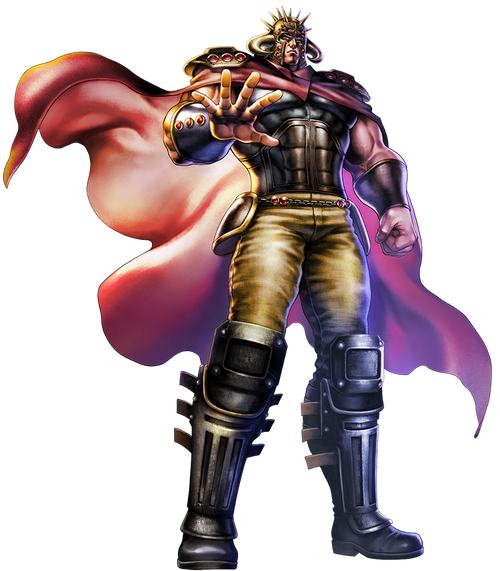 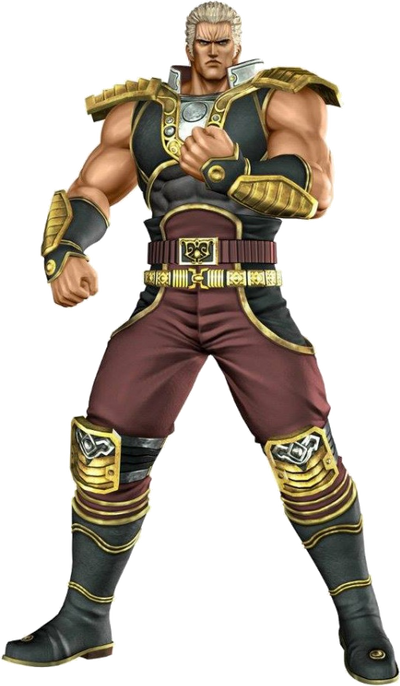 Raoh is the eldest of Ryuken's adopted sons, the biological brother of Toki and Kaioh. As opposed to his pacifist younger brother, Raoh was driven by an intense ambition from an early age. After Kenshiro was chosen as successor over him, he killed his teacher and set out onto the wasteland with a simple goal; unite it all, under his rule, the rule of Ken-Oh, the Violent Evil Star.

Powers and Abilities: Superhuman Physical Characteristics, Master of Hokuto Shinken, which allows him to target and hit someone's pressure points for various purposes (Ranging from causing them to explode to manipulating their movements to healing them), Aura (Possesses a fighting aura that protects him and allows him to attack others from a distance), Chi Manipulation, Sleep Manipulation (Can put people to sleep with by pressing their pressure points), Death Manipulation (Can bring about death by pressing a persons pressure points), Memory Manipulation (Some of his techniques allow him to change or erase the memories of victims), Instinctive Reaction, Intangibility and Void Manipulation with Musō Tensei (Musō Tensei is made up of nothingness, renders Raoh intangible, and allows him to erase others from existence), Precognition (Gets premonitions of other fighters' future attacks), Statistics Amplification (Can hit certain pressure points to make himself stronger), Forcefield Creation (Can use his aura to block attacks), Telekinesis (Can levitate and throw his enemies and objects using his aura), Power Nullification (Can negate the effects of pressure points), Regeneration (Low-Mid), Resistance to Heat, Poisons and Clairvoyance (Users of the Hokuto arts can bend their fates how they choose, making it difficult to read their destinies)

Attack Potency: Small Country level, higher in 100% Mode (Even while severely weakened and dying from his fight with Kenshiro, he split a big cloud with his Goten Sho. Matched Kenshiro in combat), Can bypass durability through Hokuto Shinken.

Speed: At least Massively Hypersonic, likely higher in 100% Mode (His blast reached the clouds at Mach 178.6 speeds, comparable to Kenshiro)

Lifting Strength: At least Class K (Should be at least comparable to Kenshiro)

Durability: Small Country level, higher in 100% Mode (Took hits from Kenshiro and was only defeated because he sacrificed a majority of his life force to Yuria before their fight)

Stamina: Extremely high (Should be on par with Ken's stamina. He can fight for long periods of time with Ken, can continue to fight even when losing tremendous amounts of blood and having his bones and muscles crushed or destroyed. Can stand up and recover having his own heart, lungs and ribs completely destroyed)

Standard Equipment: His Trident Sword, a blade he used against Toki [sword].

Intelligence: Gifted (Is a master of martial arts, having been trained in Hokuto Shinken much like his brothers Toki and Kenshiro. Though preferring to use brute force against his enemies, he is also just as skilled in the use of pressure points like his brothers, which he can use for various purposes)

-Hokuto Shinken: Hokuto Shinken is a 1,800-year-old Chinese martial art based around assassination and passed on only from teacher to student. Its power is based around targeting and hitting the 708 Keiraku Hikō (or pressure points) in an opponent's body, channeling energy into them, and through that, manipulating their movements. These pressure points can be used to control an enemy's body, in ways such as forcing them to move or destroying them from the inside with an explosion, or they can be used for healing, such as in the restoration of someone's memories, eyesight, or voice.

Raoh has his own form of Hokuto Shinken, Gō no Ken, which revolves around meeting force with greater force, making Raoh stronger so that he can overpower his enemy and destroy everything in his path.

- Keiraku Hikō: The pressure points Raoh can hit and their effects include; 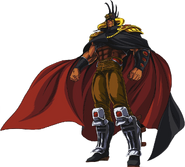 Raoh as he appears in Fist of the North Star: Arcade.

Raoh as he appears in Fist of the North Star: Ken's Rage

Raoh as he appears in Fist of the North Star: Lost Paradise.
Add a photo to this gallery