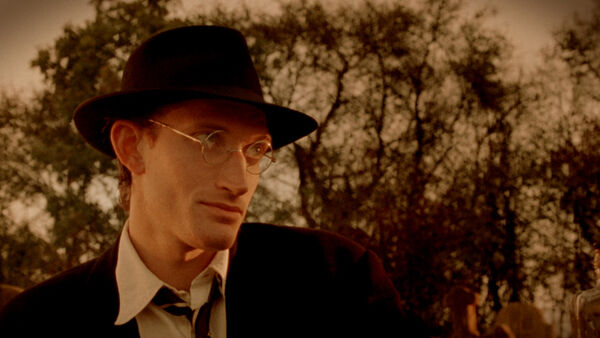 Randolph Carter is the protagonist of several stories written by H.P. Lovecraft, as well as the focus of Lovecraft's first novella, The Dream Quest of the Unknown Kadath. His bloodline had lived in Arkham for many years, dating all the way back to the wizard Edmund Carter, who had come to Arkham in order to escape the Salem Witch Trials. On top of all this, Carter began to visit the mysterious Dreamlands at an incredibly young age, further driving his lifelong love of mysticism and the paranormal. Throughout his life, Carter has been one of the few mortals to encounter beings such as Nyarlathotep, Nodens, and Yog-Sothoth. After an otherworldly meeting with the All-in-One, Carter switched lives with an alien being on another planet. After finally returning home to earth and attempting to reinsert himself into society, things went awry and Carter was never seen again. His current whereabouts, form, and status are unknown, but as he learned from Yog, he is merely one facet of an "ultimate, eternal Carter" who resides with (or within) Yog-Sothoth, far outside the confines of space and time.

Age: 56 years old at the time of his disappearance

Classification: Human, Dreamer, Facet of an eternal being, God, Denizen of Yaddith

Powers and Abilities: None notable, as he is merely a human | Ability to communicate with animals (Able to easily talk to the Zoogs and the cats of Ulthar), Appears to be able to create incredible mystical objects and structures inadvertently, or at least pull them from a place where not even the gods remembered they dwelled, Able to control when he enters and exits the Dreamlands on such a precise level that even Nyarlathotep was unable to prevent him from waking up | Reality Warping, Spatial Manipulation, Time Manipulation, Dimensional Manipulation, Omniscience, Omnipresence, Incorporeal, Acausality (Type 5), Beyond-Dimensional Existence (Type 2), Large Size (Type 10), Telepathy, Immortality (Type 10), Regeneration (True-Godly), etc. | Mastery over a vast assortment of spells, Intergalactic travel, Time Manipulation, Longevity

Attack Potency: Human level | Human level, possibly higher (Seemed to be able to control vast hordes of large cats and ghouls) | Outerverse level (An eternal aspect of the All-in-One) | Unknown, but was shown to have a mastery over many powerful spells

Durability: Human level | Unknown on his own. Multiverse level+ with Nodens's protection (Survived falling through the creation and destruction of endless universes while being chased by Hunting Horrors) | Outerverse level (An eternal aspect of the Supreme Archetype) | Unknown

Range: Melee range | Melee range | High Outerversal | Intergalactic (The people of Yaddith used mysterious light that allowed them to interact with twenty eight galaxies, as well as travel through time)

Intelligence: Relatively high, as Carter was capable of understanding complex mystical concepts at a young age | Unchanged | Omniscient | Super genius, as he was one of the most well renowned wizards on an incredibly technologically advanced planet