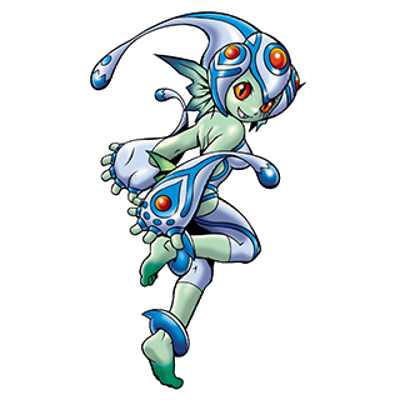 Ranamon is a Digimon that possesses power over Water which bears the might of one of the legendary Warrior Ten. It has a sharp intuition and an unstable mood probably because it was formed in an area that was mostly active in a section of the ocean within a weather forecasting system. Its emotions are erratic; when it feels good, it shows off how graceful and lady-like it is, but when it gets upset, it cries hysterically like a baby. In battle, it rarely attacks directly, and mainly does so indirectly by manipulating rain. However, since its combat abilities are intense when it is emotionally overwrought, its attacks are especially uncontrollable while it is crying.

Ranamon serves as a villain from Digimon Frontier. Cherubimon created her from the spirits of water of Ancientmermaimon making her the Legendary Warrior of Water. 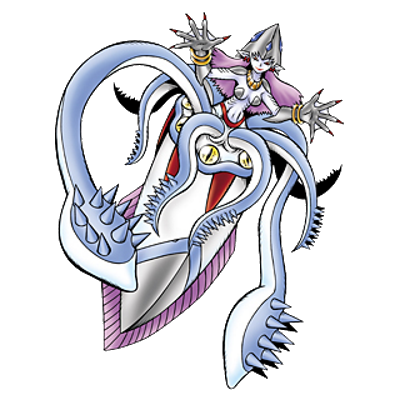 A Digimon that possesses power over Water which bears the might of one of the legendary Warrior Ten. It has a half-human, half-beast appearance, and its tentacles are used for offense and defense, doing things like attacking the enemy by rapidly spinning them, or guarding its body by converging them to form a wall. When it comes to the point where it is unable to win a match by attacking and defending with its tentacles, its body retracts into its mantle and it performs a powered up attack with its giant squid figure. The flexibility of its mantle is superior to that of its tentacles, so external physical attacks are ineffective. Although it is good at operating underwater or in the air, on land, it manipulates its ten tentacles skillfully and moves like a huge hermit crab. Its personality is sly and short-tempered like a witch.

Attack Potency: At least Island level (Comparable to Agunimon, Hybrid-levels are sometimes referred to as being on the same level of power as a Champion-level Digimon) | At least Large Star level, possibly Multi-Solar System level (As a Beast Form she should be somewhat comparable to BurningGreymon, who embodies the power of an active volcano and is comparable if not superior to most Ultimates such as Digitamamon), Ranamon and Calamaramon can Bypass Conventional Durability with Jealousy Rain.

Lifting Strength: Class 5 (Can lift massive torrents of water into the air)

Striking Strength: At least Island Class (Comparable to Agnimon, Hybrid-levels are sometimes referred to as being on the same level of power as a Champion-level Digimon) | At least Large Star Class, possibly Multi-Solar System Class

Durability: At least Island level via power-scaling (Comparable to Agunimon, Hybrid-levels are sometimes referred to as being on the same level of power as a Champion-level Digimon) | At least Large Star level, possibly Multi-Solar System level (has taken hits from all of the other Legendary Warriors, including their Beast Hybrid forms)

Stamina: High, can fight for prolonged periods against the other Legendary Warriors

Intelligence: Ranamon is as skilled a combatant as any of the other Legendary Warriors, easily contesting Agnimon and Lobomon in combat. She is a more skillful and graceful combatant, keeping far away and utilizing the advantage produced by her mastery of water to shield herself from attacks while attacking foes with water. However, she's child-like, vain, and easy to anger, making it fairly easy to trick and fool her.