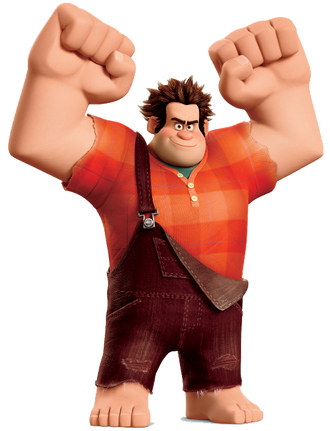 Ralph is the protagonist of the 2012 Disney film of the same name. He is the "bad guy" of the classic arcade game Fix-It Felix Jr.. After years of enduring an overbearing and thankless job, Ralph left his game to pursue the life of a "good-guy"; leading to a chance encounter with a little glitch girl named Vanellope, who helped Ralph to discover his own true value as a character.

Age: 36 (As of Ralph Breaks the Internet), Biological Age is Unknown (Shown to be an adult physically, but it's unknown how old is he in-game [not-chronologically]. Also, as a game character, he never ages)

Powers and Abilities: Superhuman Physical Characteristics, Large Size (Type 0), Weapon Mastery (Via the gun he used in Hero's Duty), Limited Resurrection (Will respawn each time he dies as long as he remains in his own game), Immortality (Types 1, 4 and 8, can continually regenerate from death as long as he is in his own game), Breaking the Fourth Wall (As seen here)

Attack Potency: At least Wall level (Punched through a dungeon wall and smashes multiple candy Cybugs), likely Large Building level (Fought and managed to stagger his virus-clones, who had combined into an gigantic building-sized automaton. In his game, he is supposed to "Destroy the building".)

Speed: Subsonic (Avoids Cybug's gunfire), likely Relativistic (Went to Internet in a email that travels at these speeds)

Intelligence: Average. Ralph is rather simple-minded

Weaknesses: Electricity severely damages him, insecure, clumsy in tight spaces and has a rather volatile temper