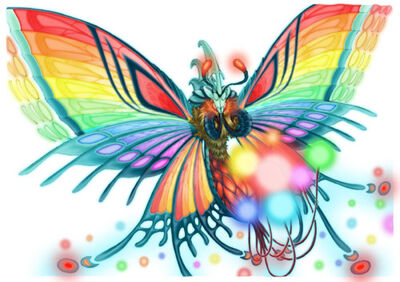 The Rainbow Butterfly is the boss of the Rainbow Butterfly Woods dungeon. Originally it was a tiny butterfly that was caught in a spider web but was saved two Ferbets. After some time passed she wanted to thank the Ferbets, and decided to use her power of Transformation to turn into a human form, calling herself Holly.

However, when Emperor Griffon sent his consciousness to the future and began to influence and bring out her monstrous nature, and she fled into the woods to keep herself from harming anyone. She was soon confronted by Max and Monica, and after the duo defeated her, Emperor Griffon's hold on her ended.

Powers and Abilities: Superhuman Physical Characteristics, Flight, Large Size (Type 0 in her butterfly form), Magic, Energy Projection, Status Effect Inducement (Able to poison a target on contact with it's magic), Duplication, Invulnerability (The Rainbow Butterfly cannot be harmed unless it's struck while split into it's seven small colored duplicates and in the right order of their color which is that of the rainbow, Red, Orange, Yellow, Green, Blue, Indigo, and Violet), Transformation (Has the power to transform herself into a human), Resistance to Mind Manipulation (Resisted Griffon's attempt to control her for some time)

Attack Potency: At least Wall level (Stronger than Linda who is an Elephant, should also be stronger than Holloween which can fire large bombs and missiles)

Durability: At least Wall level (Should be more durable than Linda, and comparable to Holloween who can tank it's own bombs)

Stamina: Superhuman (Could keep up with Max and Monica, both of which can go through monster filled dungeons without getting fatigued)

Range: Dozens of meters with magic

Intelligence: Average (While in her human state, she is shown to have basic intelligence)