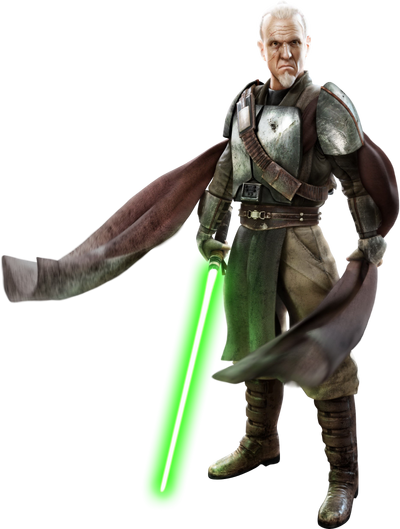 Rahm Kota was a Human male who served as a Jedi Master and General during the Clone Wars. He would later ally himself with Alderaanian Senator Bail Organa after the fall of the Jedi Order and rise of the Galactic Empire. Kota began striking at imperial targets, taking interest in the Dark Lord of the Sith Darth Vader and hoping to draw him into a confrontation and would become a recurring comrade of Starkiller later on.

Attack Potency: Planet level (One of the most powerful Jedi Masters of his time outside of the Jedi High Council. Can contend with Starkiller)

Speed: Relativistic (Was able to move so fast that even Starkiller was unable to react) with FTL reactions and combat speed

Lifting Strength: Peak Human, can be augmented to Superhuman Levels via Force Amplification

Stamina: Very high (He had been fighting for a week straight without rest against waves of different opponents in an arena on Cato Naimoidia)

Range: Dozens to hundreds of meters with telekinesis, Interstellar with Force senses and telepathy

Weaknesses: Can be overconfident at times.

Retrieved from "https://vsbattles.fandom.com/wiki/Rahm_Kota?oldid=5551366"
Community content is available under CC-BY-SA unless otherwise noted.