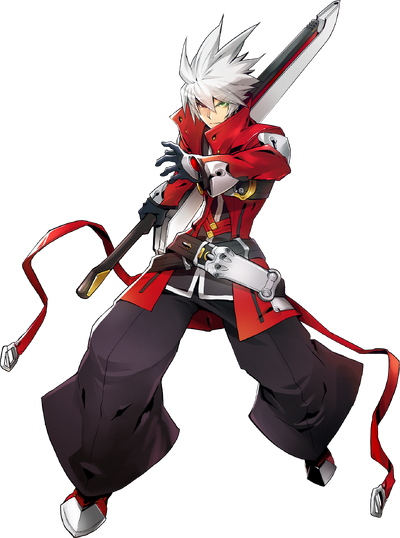 Ragna the Bloodedge is a wanted criminal with an extraordinarily large bounty on his head (well in the trillions) for attempting to destroy the Novus Orbis Librarium, and is Jin and Saya's older brother. He is one of the original 12 playable characters and the main protagonist of the BlazBlue series from Calamity Trigger to Centralfiction.

Superhuman Physical Characteristics, Weapon Mastery, Martial Artist, Immortality (Type 1, 2, 3, 4, 5 and 8; Has a life link with Nu, is also the Central Fiction, the never-ending nightmare of Amaterasu), Enhanced Senses (Can navigate through the boundary, an infinite space of nothing), Acausality (Type 1; Is unaffected by the effects from a Phenomena Intervention, which can reset an entire timeline), Limited Glyph Creation (Can create glyphs when unleashing his power), Non-Physical Interaction (Can hit Arakune and Izanami), Instinctive Reaction (Was able to instinctively attack wild animals despite not remembering any combat training in Phase Shift), Self-Sustenance (Type 1; Can withstand the Edge, which has no oxygen), Weapon Creation (Can create tendrils and sharp objects from seithr), Regeneration (At least Low-Mid, possibly Mid; Can regenerate a hole in his chest due to Azure and was fine after seemingly cut in half by Jin with Susano'o Unit), Transformation (Can transform into parts of the Black Beast), Blessed (via Amaterasu), Energy Manipulation, Statistics Reduction, Healing, Presence Concealment (Has possession of Concealment Ars Magus), Fear Aura (His presence scared Mai and Platinum), Soul Manipulation (The Azure Grimoire can damage the soul, negating any form of recovery, even when the reality is warped by a multiversal entity), Limited Extrasensory Perception (The Azure Grimoire is capable of reacting to Murakumo Units), Statistics Amplification (Scaling from Lambda who can amp herself with IDEA Engine), Perception Manipulation (Just standing near him made Litchi sink into a pit of darkness), Absorption (Absorbed the IDEA Engine), Air Manipulation (Capable of blowing people away by bursting), Immortality Negation (1, 2, 3, 4, 5, 6, 7, 8, and 9), Resurrection, Healing and Regeneration Negation (Up to High-Godly; Was able to erase Terumi's entire existance despite his numerous immortalities and absorbing Noel which he stated would help him survive Doomsday was also stated by Izanami that he could be able to kill Noel, was able to inflict wounds on Jin that not even Celica could heal, is also capable of killing Death itself, the Azure is also capable of killing Naoto more than once during the events of Bloodedge Experience, and is capable of killing Arakune), Limited Reality Warping (If the corrosion from Azure Grimoire continues, it will eventually cause rupture to other phenomena), Power Nullification (Scales from Mai, who was able to nullify a barrier created by Cypher, and used the IDEA Engine to reverse Mu's smelting process), Existence Erasure (Erased Terumi from existence in Azure Horizon), Attack Reflection (Reflected Izanami's absorption back to Noel), Dream Manipulation (Consumed many of the character's dreams), Poison Manipulation, Madness Manipulation, Biological Manipulation, Life Manipulation, Time Manipulation, Information Manipulation, Chaos Manipulation, Transmutation, Corrosion Inducement, Void Manipulation and Corruption (Type 3) (The Azure Grimoire is stated to be a portable cauldron and is able to harness the power of Boundary), Life Absorption (Ragna's drive, Soul Eater can absorb a person's life force), Heat Manipulation (Capable of creating heat with the Azure Grimoire)

Resistant to the Following: Transmutation (Despite not being a chosen, he's unaffected by the Embryo's effect to turn everything into seithr), Clairvoyance (Is outside of the flow of the tale in the Dark War to the point that he can alter the outcome without being noticed by others with clairvoyant powers), Spatial Manipulation and Explosion Manipulation (Able to tank Bolverk), Poison Manipulation, Madness Manipulation, Biological Manipulation (Everybody can resist Seithr to some extent which is poisonous, can induce addiction and deteriorate bodies), Statistics Reduction (Able to fight in full power while in Seithr snow, which reduced the power of squadron zero members), Fear Manipulation (Can fight Azrael without being affected by the Fear), Absolute Zero and Life Manipulation (Could withstand Yukianesa's strikes, which can freeze Azrael and erode away life), Body Puppetry (Able to wield IDEA Engine which is the exact copy of Nox Nyctores which manipulates the user's body), Phenomena Intervention (The Azure Grimoire and the IDEA engine is able to resist Amaterasu's phenomena intervention), Mind Manipulation (Able to resist the boundary/cauldron, which when entered or get close, will result in taking infinite information, dating across beginning of time and all possibilities), Corrosion Inducement (Resists getting corroded by the Cauldron), Sleep Manipulation (Resisted being put into a deep sleep by Shiori), Heat Manipulation (Is unfazed by the intense heat from a cauldron), Gravity Manipulation (Can resist the Imperator's gravity pin), Perception Manipulation (Resist the effects of Ars Magus, which nullifies the senses of the user), Petrification (As someone with competent skills in Ars Magus, he should be able to replicate an Ars Magus barrier, which is stated to protect the user from said effect), Physics Manipulation (Could tanks blows from Azrael, who is so strong that he bends and breaks physics whenever he strikes), Void Manipulation and Corruption (Type 3) (Can resist the effects of the boundary, which can erase those that enters it, and corrupt them beyond recovery in a similar fashion to what happened to Arakune), Deconstruction (Can fight the Black Beast without turning into dust from its presence), Power Nullification (Capable of using the Azure Grimoire while within Celica's vicinity and when Kushinada's Lynchpin was activated), Precognition (Terumi couldn't read him), Death Manipulation (Could resist the effect of the Immortal Breaker), Chaos Manipulation (Resists the boundary, which turns everything to a spiraling chaos), Soul Manipulation, Healing and Regeneration Negation (Up to High-Godly; Unaffected by strikes from a Nox Nyctores, which has similar properties to the Azure Grimoire and Magic, can even withstand blows from Hazama's Azure, which is superior to his own azure, which is stronger than the Nox Nyctores' regen negation capabilities, which surpasses Ars Magus, weapons that are capable of killing the Black Beast, a creature that has the ability of Self-Observation, which is what Terumi used to regenerate from Hakumen's Time Killer)

Same as before, plus Intangibility (Phased through Kagura's strikes), Psychometry (Can sense the Rettenjo with Bang),and Invulnerability (Is immune to conventional weapons due to existing outside of Logic)

Same as Before, plus Self-Sustenance (Type 2 and 3; lacks the need to for sustenance due to becoming a being made of seithr), Regeneration (Mid-High, likely High; Can regenerate as long as seithr exists. High-Godly via Resurrection; Scales from Terumi, who was able to come back from being erased by Time Killer with Self Observation), Technology Manipulation (Seithr itself is capable of messing with the technology of the NOL and sector seven), Rage Power and Berserk Mode (using the Black beast form will make Ragna filled with rage and go wild on everything, regardless who or what it is), Earth Manipulation and Weather Manipulation (The Black Beast is capable of messing with the natural weather to the point that seasons no longer occur normally, and even mess with the soils themselves), Size Manipulation (Can grow in size as shown in the Phase Shift novels), Pocket Reality Manipulation, Creation and Sealing (Black Beast's psyche is portrayed as a pocket dimension and trapped CP version of himself for two years while fighting countless amount of dogs made of seithr), Darkness Manipulation, Paralysis Inducement (The Black Beast can paralyze anyone within its vicinity), Natural Weaponry (Can create various sharp objects from his own seithr), Inorganic Physiology (Type 1), Memory Manipulation (Wiped Jin's memories blank with his mere presence despite having the Power of Order as a defense mechanism), Deconstruction (Was capable of disintegrating soldiers with its presence in Phase Shift), Resurrection (Via Self-observation), Teleportation, Status Effect Inducement, Shapeshifting, Cloud Manipulation, Curse Manipulation, Insect Manipulation, Summoning, Invisibility, Telepathy, Absorption and Power Absorption (Scaling from Arakune who is merely an incomplete Black Beast) and BFR (Sent Noel near the Gate of the Azure when he devoured her)

Resistance to Radiation Manipulation (As a being made of seithr, he can cancel out any radioactive particles with his presence as stated in Phase Shift)

Same as Before, plus Fate Manipulation (Azure weaves all fates together and stitch it as it desires), Causality Manipulation (The Azure can manipulate cause and destiny), Non-Corporeal, Abstract Existence (Type 1; Became Possibility itself), Nonexistent Physiology (Type 1; No longer exists as an individual), Reality Warping and Probability Manipulation (Can create all the possibilities from the people's dreams), Power Bestowal (Azure is the main source of Drive and Eye of the Azure), Phenomena Intervention (Phenomena interventions are stated to be the Power of the Azure), likely many, many more (All the Drives in the Blazblue verse originates from the Azure)

Attack Potency: At least Large Town level+, likely Small Country level+ normally (Easily above the likes of Tager and Bang, who he can defeat with little difficulty. Superior to Mai and Meifang, the latter of whom survived the destruction of Ibukido at the hands of Take-Mikazuchi). Large Planet level with the Azure Grimoire and IDEA Engine (By releasing their restrictions, Ragna becomes strong enough to take on and defeat 20% Hakumen and Terumi in Hazama's body) | Small Country level+ normally (Traded blows with Take-Mikazuchi and a restricted Azrael). Large Planet level with the Azure Grimoire and the IDEA Engine | Large Planet level (Can keep up with Izanami and Nine) | Large Planet level (The Black Beast is regarded as one of the most powerful beings in the series, being comparable to Izanami. When Ragna was on the verge of transforming into the Black Beast, he became powerful enough to nearly kill Central Fiction Jin with collateral damage) | Multiverse level+, likely Low Complex Multiverse level (Became a being that exceeds Amaterasu. The True Azure is acknowledged as the most powerful force in the series, with Amaterasu being inferior to it). Able to ignore conventional durability in variety of ways.

Stamina: Superhuman; fights whole armies without tiring, and can take multiple stab wounds and lose his arm and still stand up. Limitless with Blazblue and Black Beast.

Range: Extended melee range with Blood-Scythe. At least tens of kilometers with energy attacks. Multiversal+ with the Black Beast's power (Was able to send Noel to the Gate of the Azure, which is in the deepest ends of the Boundary) | Multiversal+, likely Low Complex Multiversal

Intelligence: Above average; an expert in combat, though he usually doesn't strategize unless it is necessary, preferring to leave such to others. Nigh-omniscient while having the True BlazBlue.

Weaknesses: Ragna is short-tempered and easily provoked, though this only applies up to Continuum Shift, as he managed to control himself during Chronophantasma.

Note: Ragna's True BlazBlue Key shouldn't be used in VS battles because of the fact that he is unlikely to fight or even have it's own consciousness at this form. 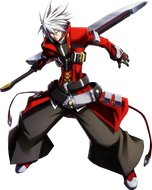 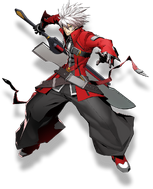 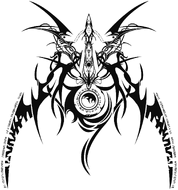 The emblem of Ragna. 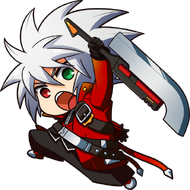 Ragna as a child

Ragna at the verge of becoming The Black Beast

Ragna with True BlazBlue
Add a photo to this gallery

BlazBlue CentralFiction - Bloodline (Jin or Ragna Vs Izanami theme)-1
Bloodline, the theme of Ragna and Jin's fights against Izanami.

Start a Discussion Discussions about Ragna the Bloodedge