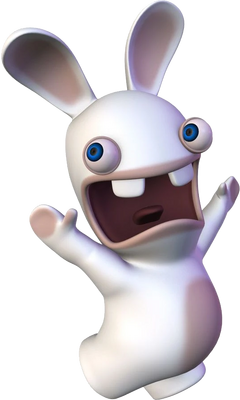 Rabbids are a group of insane, rabbit-like beings that first appeared in the Rayman series, but later starred in their own games. They first appeared as antagonists to Rayman in Rayman Raving Rabbids. Since then, they have been considered major threats on both the Glade of Dreams and the Planet Earth.

According to the backstory in Rayman Raving Rabbids for the Game Boy Advance, they used to be peaceful creatures that inhabited Rayman's world. Widespread bullying of the Rabbids caused them to go crazy and hold a vendetta against the people of the Glade. They disappeared from sight for a long period (since Rayman 1), plotting their revenge against everyone in the Glade of Dreams. This is partially contradicted in Rabbids Go Home, where Rabbids are shown to not know where they came from.

Powers and Abilities: Superhuman Physical Characteristics, Toon Force, Small Size (Type 0), Self-Sustenance (Type 1; Can survive in space), Sound Manipulation (Yells are loud enough to stun people and break glass in Rabbids Go Home), Breaking the Fourth Wall (Particularly in the Rabbids comics where they are repeatedly shown to be able to manipulate the medium they are in; one Rabbid was shown to be able to interact with the artist), Regeneration (Mid-High; can regenerate from ashes instantly in Rabbids Land), Immersion (Was able to enter a TV and create its own TV shows in Rayman Raving Rabbids TV Party), Resistance to Lava (as shown in Mario + Rabbids Kingdom Battle )

Speed: Varies from Massively Hypersonic to Sub-Relativistic with Massively FTL+ attack speed (Able to keep up with Rayman and his friends)

Lifting Strength: At least Class K (A rabbid pushed a passenger airplane and threw it into a toilet; A Boeing 747, which is standard for passenger airplanes, have an empty weight of at least 152.9 tonnes), possibly higher (In the first intro of Rabbids Invasion, a group of Rabbids pull all the continents together to create a single continent in the shape of a Rabbid)

Durability: Varies from Small Country level to Solar System level (Comparable to other Rayman characters; Survived flying into the Sun)

Stamina: Very high (Should be comparable to Rayman)

Intelligence: Below Average (Vast majority are considered stupid and slow-witted)

Weaknesses: Generally very stupid and easily fooled. They are also easily angered and reactionary. They are shown to be obsessed in carrots