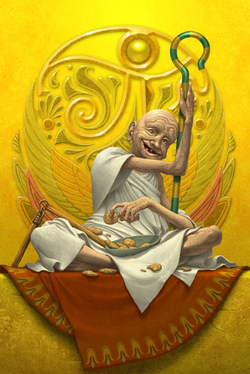 Ra is the personification of the Sun and the first egyptian god born from the Sea of Chaos. By creating the concept of order, or Ma'at, opposing to Apophis and Chaos(Isfet), he made possible for others gods to be born as well, and then he became their first pharaoh and the pillar of their power. After taking precautions to stop Apophis's threat, Ra retired to the Duat, becoming a senile god in the past centuries, however he returned to his former self after being hosted by Zia to battle once again against the Chaos Serpent.

Classification: Eagyptian God of Order, the Sun and the Day, Former Pharaoh of the gods, Protogenos

Attack Potency: At least Multi-Continent level (The most powerful Egyptian god and only surpassed in might by Apophis, has fought Apophis countless times and won with the help of Set and was the only god in the final battle who could harm Apophis effectively), possibly Planet level (Created the world and formulated its laws)

Speed: At least High Hypersonic+ (Can dodge attacks from Apophis and should at least be comparable to other gods like Set)

Lifting Strength: At least Class E (Should be comparable to Apophis)

Durability: At least Multi-Continent level (Superior to Set), Immortality and Resurrection make him difficult to kill

Intelligence: Immortal being that existed since creation

Weaknesses: Will lose his abillity to be reborn and can become senile and comatose without Khepri, Needs a host to appear in the mortal world for any significant length of time, Can be destroyed if a magician casts an execration spell on his sheut, The knowledge of his true name gives a person power over him