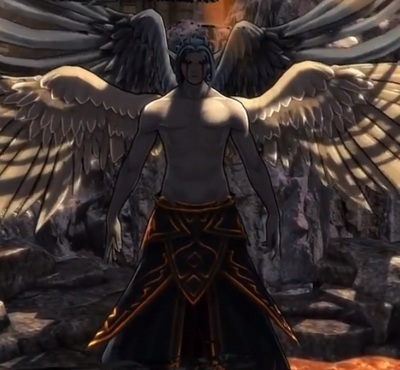 Powers and Abilities: Superhuman Physical Characteristics, Flight, Teleportation, Enhanced Senses, Immortality (Types 1 and 3), Regeneration (Low-Mid), High Resistance to Mind Manipulation, Empathic Manipulation and Magic (Sylvain are naturally resistent to animic powers. Zemial's powers grant him immunity to any mental or empathic power that would prevent him to kill), Resistance to Poison Manipulation and Disease Manipulation, Light Affinity, Power Bestowal, Poison Manipulation and Madness Manipulation (Anyone infected by his blood will turn into an agent of Zemial, turning into madness and gaining few of his gifts), Extrasensory Perception (Can see both the material and spiritual planes overlaped. Capable to tell who is affiliated to light or darkness), Non-Physical Interaction, Destruction (Posseses few Zemial's gifts, the God of Destruction, capable to reduce to ashes or make explode any inorganic matter by his mere touch, and induce damage to other beings by either touching or seeing them, damaging the essence of everything it damage, any being destroyed by him of inferior gnosis than Ra-Me-Tek is erased from existance), Disease Manipulation and Aura (The mere presence of Ra-Me-Tek cause the plants to die and people to get sick), Healing Factor Nullification, Magic including Weakness Inducement, Damage Boost, Power Nullification (Ki, magic and psionics), Destruction (Senses, resistances, status effects, memories, powers, will, skill) and Death Manipulation

Attack Potency: City level (Comparable to characters like Romeo Exxet, Ophiel and Griever. Even the weakest Messenger is capable of destroying cities)

Speed: At least Superhuman with likely Hypersonic reflexes (Should be comparable to the Shadow of Omega)

Intelligence: Very high, however, as a result of Zemial's blood, Ra-Me-tek is severely deranged, only caring about the end of all existence

Retrieved from "https://vsbattles.fandom.com/wiki/Ra-Me-Tek?oldid=5407731"
Community content is available under CC-BY-SA unless otherwise noted.