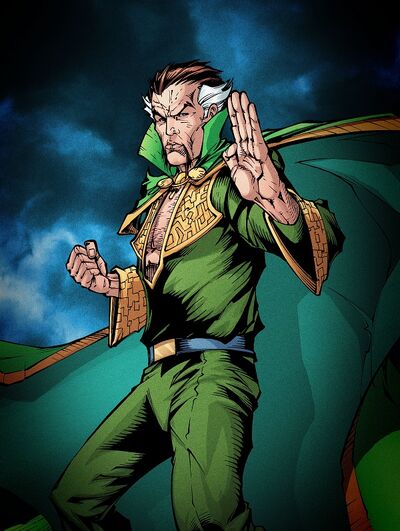 Ra's Al Ghul was born to a nomadic tribe hundreds of years ago in Arabia. Always being interested in science, he left his tribe and worked for many years as a physician, marrying the daughter of the man he apprenticed under. When the prince of the city fell sick, the king asked Ra's for his aid in curing him. Using his knowledge of science and mysticism Ra's invented the first Lazarus pit, using it to cure the prince. However, when the prince came out of the pit he was overtaken in a vengeful rage, killing Ra's wife. The King was unable to believe his son would kill someone and sentenced Ra's for the crime. Ra's would escape, rejoin his old tribe and proceed to lay waste to the city, beginning his reign as the Demon's Head.

Classification: Human, Leader of the League of Assassins

Powers and Abilities: Superhuman Physical Characteristics, Master of Martial Arts, Weapon Mastery, Genius Intelligence, Stealth Mastery, Vast Ressources, Multilinguism, Preparation, Longevity (With the Lazarus Pit), Resurrection (With the Lazarus Pit), Magic, Possession (Via Magic, has on several occasions demonstrated the ability to transfer his soul into the bodies of others)

Attack Potency: Small Building level+ (Comparable to Batman, if not superior to him)

Stamina: Very high (Can fight even while heavily injured)

Intelligence: Extraordinary Genius (He has practiced medicine and science for centuries and created the Lazarus Pit)

Retrieved from "https://vsbattles.fandom.com/wiki/Ra%27s_Al_Ghul_(Post-Crisis)?oldid=6620292"
Community content is available under CC-BY-SA unless otherwise noted.