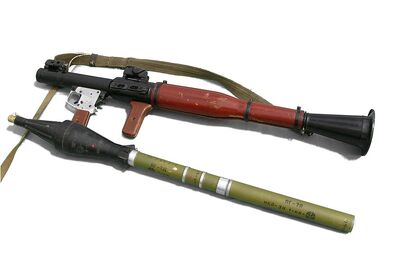 The RPG-7 was first delivered to the Soviet Army in 1961 and deployed at squad level. The ruggedness, simplicity, low cost, and effectiveness of the RPG-7 has made it the most widely used anti-armor weapon in the world. Currently around 40 countries use the weapon, and it is manufactured in several variants by nine countries. It is popular with irregular and guerrilla forces. The RPG has been used in almost all conflicts across all continents since the mid-1960s from the Vietnam War to the early 2010s War in Afghanistan.

Tier: At least 9-B, 9-A with thermobaric warhead

Powers and Abilities: Launches grenades at high speeds and explodes upon impact, used as an anti tank weapon as well as anti-building weapons.

Users: Many militaries worldwide, as well as irregular and guerrilla forces

Attack Potency: At least Wall level (Explosive filler varies between 0.21 and 2.1 kg of OKFOL high explosive for different warheads. HEAT warheads are capable of penetrating 260-750 mm of RHA), Small Building level with TBG-7V thermobaric warheads (The TBG-7V is designed to target bunkers and buildings. Its theoretical explosive yield from its 10 meter lethal blast radius should be ~95,298,833 J)

Range: 200 m (effective) / 500 m (maximum) firing range against moving objects; self detonates at up to 920 m against stationary targets. TBG-7V thermobaric warheads have a lethal blast radius of 10 m. OG-7V fragmentation warheds have a lethal area of 150 m^2 against targets equipped with body armor which is equal to a 7 m lethal radius.

Weaknesses: Hit probability decreases when firing in a crosswind due to the unusual behaviour of the round; in an 11-kilometre-per-hour (6.8 mph) (3 m/s) wind, the gunner can not expect to get a first-round hit more than 50% of the time beyond 180 m.