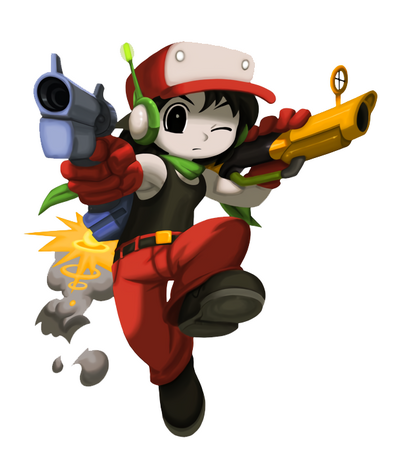 Quote is the main protagonist and the playable character of Cave Story. He is a robot designed with the task of eradicating the darkness within the depths of The Island. At the beginning of the game's events, he wakes up in a small cave, having no memory of his past. After wandering around, he comes across Mimiga Village, where he gets sucked into the conflict stirred up by The Doctor, who has some tie-ins with his past. The game follows his pursuit to resolve this conflict and put an end to his evil-doings.

Attack Potency: Small City level+ (He, with the help of Curly Brace, was capable of defeating The Core and Ballos, both with the power to maintain the entire Island in the sky)

Speed: Massively Hypersonic reactions and attack speed (Can shoot lightning from his Nemesis, is able to dodge many missiles and machine gun fire, and even lightning from Ballos)

Durability: Small City level+ (Can take hits from The Core and Ballos)

Stamina: Very High, due to being a robot.

Range: Dozens of meters with most weapons.

Intelligence: Fairly intelligent and skilled combatant, read a book on how to treat flooded robots and managed to fix them perfectly soon afterwards. He is an expert marksman and swordsman, capable of using perfectly any weapon he finds in his adventure. Was capable of defeating Misery, The Doctor and even Ballos in a row.

Weaknesses: Quote used to be unable to stay in water for too long, but later loses this weakness when he obtains Curly's air tank. However, he is still less mobile in water.

Inuyasha (InuYasha (Verse)) Inuyasha's Profile (Inuyasha was in his Hanyō Form, and speed was equalized)