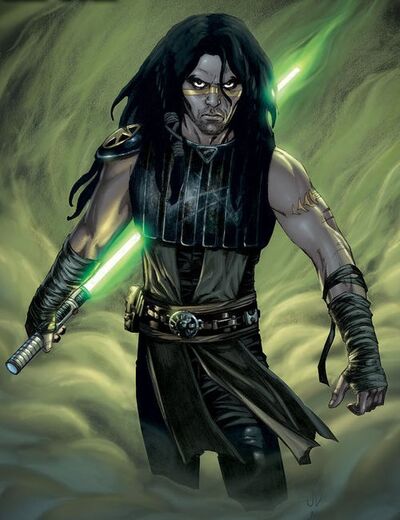 Quinlan Vos was a male Kiffar Jedi Master who lived during the final decades of the Galactic Republic. He was well known for his powers of retrocognition and psychometry and was thus a masterful investigator and tracker. He served the Jedi Order as a spy and often worked as an undercover agent and did things behind the scenes rather than leading troops on the front lines during the Clone Wars. He was a maverick who was regarded as “crazy” by some, including his close friend Obi-Wan Kenobi, and was known to bend the rules and skirt close to the Dark Side. The former Padawan of the Jedi Master Tholme, himself a skilled spy, he is known to have trained one Padawan during his life - the Twi’lek Aayla Secura, who would go on to become a Jedi Master herself.

Quinlan’s fate in the new Disney canon differs greatly from his fate in the old Legends Expanded Universe. In Legends, towards the end of the Clone Wars, he was ambushed on Kashyyyk by Clone Troopers and narrowly escapes alive. He would later meet up with his secret lover Khaleen Hentz, a former separatist agent who had defected, and would live out the rest of his days in obscurity along with Hentz and their son Korto Vos. In the new Disney continuity, he would fall in love with Asajj Ventress during a mission to assassinate Count Dooku, for which he recruits her. He falls to the Dark Side after being captured and tortured by Dooku but is eventually rescued by Ventress, who ends up sacrificing herself by taking a lethal Force Lightning barrage from her former Sith Master which was meant for Quinlan. After rejoining the Jedi Order and performing the last rites of Ventress on her homeworld of Dathomir along with Obi-Wan, his fate is unknown.

Age: Roughly 38 as of the end of the Clone Wars

Powers and Abilities: Superhuman Physical Characteristics via Force augmentation, Telepathy, Telekinesis, Subatomic matter manipulation (via manipulation of Holocrons, which require fine adjustments on atomic and subatomic levels), retrocognition, psychometry, Mind Manipulation, Memory Manipulation, Pseudo-Invisibility (via Force Cloak), Electricity Manipulation (has basic knowledge and skill with Force Lightning), Energy Manipulation (can reflect, redirect, absorb energy attacks thrown at him via Tutaminis), Animal Manipulation (Can dominate the minds of animals and make them do his bidding via the Beast Trick ability), Precognition (battle precognition common to most Force Adepts), Enhanced Senses and Perceptions (Can track people by the effects they have on the environment around them), masterful swordsman and knife wielder, skilled hand-to-hand combatant, skilled marksman, highly skilled spy and investigator, master of stealth and infiltration, competent deceiver and schemer, capable strategist & tactician

Attack Potency: Large Town level (Comparable to Obi-Wan Kenobi, whom he is a peer of. Narrowly bested Dooku when he fell to the Dark Side and use unpredictable move-sets to confuse him) | Planet level (Is a peer of and comparable to Obi-Wan Kenobi. One of the most powerful Jedi Masters of his time outside of the Jedi High Council as noted by Mace Windu. With the aid of a Force Bond from three other Jedi, managed to defeat Volfe Karkko, whose power was such that it managed to corrupt an entire planet and leave it steeped in the Dark Side even when he was sealed. Defeated Sora Bulq, whose power has been noted by Yoda and was a sparring partner of Mace Windu and overall just below the likes of Dooku)

Stamina: Very high (Has endured long periods of torture without sustenance. Can press on and even fight with severe injuries such as a crushed arm, multiple deep wounds across the torso, collapsed lungs, and a blaster bolt wound in the chest)

Intelligence: Quite high. Is a highly skilled and dangerous combatant who can learn and adapt very quickly. Skilled detective/investigator and tracker, skilled spy and master of stealth and infiltration, competent deceiver and schemer, capable strategist & tactician.

Weaknesses: Can be overconfident and highly reckless at times, which has nearly gotten him killed on multiple occasions. The fact that he skirts so close to the Dark Side and is potentially suffering from psychosis due to his line of work is another liability.

Retrieved from "https://vsbattles.fandom.com/wiki/Quinlan_Vos?oldid=4636222"
Community content is available under CC-BY-SA unless otherwise noted.