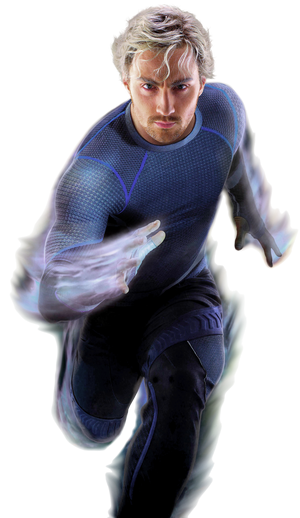 Pietro Maximoff was a native of the Eastern European country of Sokovia who grew up with his fraternal twin sister, Wanda. The country, which was embroiled in constant war and strife, became the base of operations for a HYDRA cell operated by Wolfgang von Strucker, who recruited Pietro and Wanda to take part in a series of tests involving the Scepter, giving the twins superpowers. While his sister received a number of mental abilities, Pietro acquired the ability to move at supersonic speeds and other physical features. When HYDRA fell, the twins joined the A.I. Ultron to continue their quest for revenge on Tony Stark, but eventually switched sides and helped the Avengers when they discovered Ultron's true intentions. Pietro then fought in the Battle of Sokovia alongside all of the other Avengers, but later sacrificed his own life to protect Hawkeye and a civilian boy named Costel, much to his sister's grief.

Tier: Varies, up to High 8-C in super-speed

Age: Between 13-30 at time of his death (His twin sister, Wanda's age is in that range)

Powers and Abilities: Superhuman Physical Characteristics, Superhuman Speed, Extreme Force Generation, Bilingualism, Regeneration (Low. Healed himself after his arm got grazed by a bullet), Improved Thermal Homeostasis (Quicksilver can function in a stable internal environment that requires constant monitoring and adjustments to his condition that changes constantly), Aura Generation (when he runs a blue aura surrounds him that protects him and anyone he's carrying. The faster he is, the brighter the aura gets), Afterimage Creation

Speed: Massively Hypersonic+ (Perceived a bullet, Thor, Iron Man, Captain America and Mjolnir in slow motion. Moved numerous people out of the path of a high speed train. Caught a bullet and unloaded Klaw's gun, before he could react. Moved Wanda before Ultron could react. Saved Hawkeye from Quinjet fire from a distance)

Striking Strength: Varies, up to Large Building Class in super-speed

Durability: Street level normally (Pietro fell from meters and was tackled by Captain America. He got up after a few moments), up to Large Building level with his blue aura (Can withstand the force of his own blows)

Weaknesses: He can eventually tire out and can be somewhat overconfident. Vulnerable to sharp objects and piercing attacks.