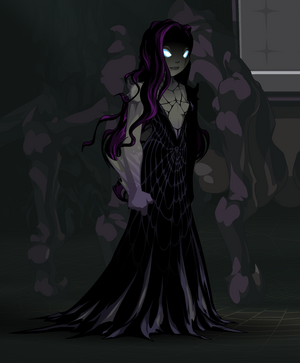 The Queen of Monsters is Drakath's master and the true antagonist of Adventure Quest Worlds who wants to raise the Elemental Titans across the continent of Drakonus. Sometime before Ganaloth slew the Eternal Dragon of Time, the Queen of Monsters was sealed away by 13 heroes using their Elemental Orbs. While sealed away, the Queen of Monsters offered to save Drakath's life and grant him his Chaos powers, but in exchange, Drakath would have to set her free. The full activation of all 13 Chaos beasts by the 13 Lords of Chaos led to her resurrection but in return, she took back Drakath's powers which led to Drakath's defeat in the hands of the Hero of Lore. Following Drakath's defeat, the Queen of Monsters appears and starts warping the landscapes all over Lore. After the Queen of Monsters's release, she initiated the Frostval invasion which led to the defeat of the beast Quetzal, then allying with Tyndarius to start the Firestorm Onslaught which led to the release of the Fire Titan Phedra. Then later, she started the Infernal Invasion by opening a portal between the Infernal Realm and the Celestial Realm, and then took control of Brightoak Warrior Nevanna to release the Earth Titan Gaiazor.

Name: Queen of Monsters, Mother of All Monsters

Attack Potency: At least Star level (Superior to Drakath. Was going to absorb all the energy from the Sun with only a fragment of her soul)

Lifting Strength: At least Class T (Easily defeated Karok who fought evenly with Kezeroth who was able to overpower Quetzal. Likely stronger than Drakath who was able to lift and throw the Eternal Dragon of Time with sheer physical strength. Lifted landmasses and created volcanoes and mountain ranges across Lore)

Intelligence: Skillful manipulator and orchestrator of multiple invasions across Lore without sacrificing her major figures. Had Drakath, who had most of the main characters playing for his plans, playing for her own plans.

Retrieved from "https://vsbattles.fandom.com/wiki/Queen_of_Monsters?oldid=5386452"
Community content is available under CC-BY-SA unless otherwise noted.