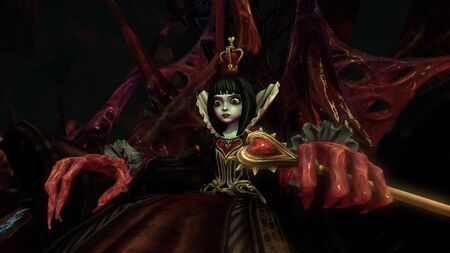 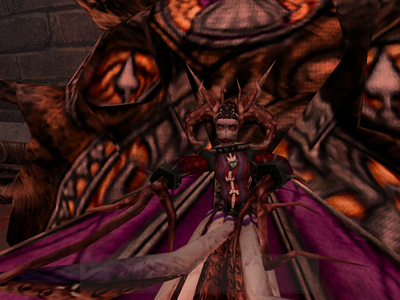 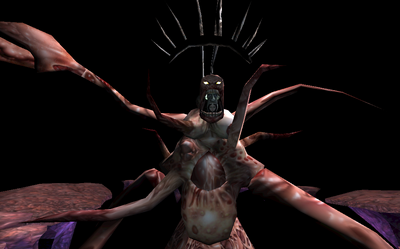 The Queen of Hearts is a major figure in the Alice series. She serves as an antagonist towards Alice Liddell.

In the first game, the Queen is the main antagonist and the final boss. Known as a corrupt, violent and merciless dictator, she is feared by all except Alice and the rebels. Her tentacles creep all throughout Wonderland. She is defeated and killed by Alice in the ending.

In the second game, the Queen is revived due to the hard mental reboot of Wonderland, although she is no longer in power over Wonderland and she wants nothing more than to be left alone in her decaying land.

Name: The Queen of Hearts, The Red Queen

Age: Unknown (she exists since Alice started to imagine Wonderland in her childhood)

Powers and Abilities: Superhuman Physical Characteristics, Immortality (Types 3 and 8, the Queen is an embodiement of Alice's darkness and as such, she will exist as long as Alice's mind will be tainted by madness), Regeneration (Low-Godly, regenerated from being destroyed by Alice in the first game), Telekinesis, Energy Projection, Fire Manipulation, Breath Attack (Can breath fire from her Jabberwocky head in her final form), Ice Manipulation, Absorption (Consumed Alice to make her remember what happened during the Fire), Memory Manipulation (Unlocked Alice's hidden memories of what happened during the night her family died), Sound Manipulation (Can emit a disruptive scream from her belly), Acid Manipulation (Can fire a splatter of green liquid that scorches flesh), Corruption (Type 3, intended to overcome Alice's mind with her madness and erase her to become the dominant personality), Summoning (Can summon her guards and make her tentacles appear from anywhere in Queensland), Mind Control (Implied to have been able to usurp control of the Ruin from the Dollmaker as she was somehow able to control some of the Ruin monsters. Can control the mind of her servants), Biological Manipulation, Body Control (Can use her tentacles to fight and is able to alter her physical form at will), Shapeshifting, Creation (Can create a puppet body and use it as her true form), Possibly Omniscience in Wonderland (Implied to have supreme knowledge over Alice's mind)

Attack Potency: At least Wall level (Vastly stronger than Alice and her guards) to Multi-City Block level (Her tentacles spread throughout Queensland, which is dependant of her own well-being as it will decay if the Queen is destroyed or weakened, and her entire castle is covered within her flesh, implying that the edifice is built into her own massive body), likely higher (Possesses a high degree of influence over Wonderland. Was trying to take over Alice's mind in order to become the dominant personality and take control of her mind and body)

Speed: At least Superhuman (Vastly faster than Alice and her guards)

Durability: At least Wall level (Easily resisted to many attacks from Alice and to powerful attacks from her most dangerous weapons like the Jabberwock’s Eye Staff), Immortality and Regeneration, as well as her nature as an embodiement of Alice's madness, make her very hard to be destroyed for good

Range: Standard melee range to extended melee range by altering her body and her tentacles, at least several meters via other powers

Standard Equipment: Her Scepter, Her Crown

Intelligence: At least High. The Queen is extremely manipulative and dangerous, ruling Wonderland as a ruthless tyrant and was able to lure Alice to her castle so she could try to overcome her will and take over her mind. Possibly Omniscience since she's implied to possess a complete knowledge of Alice's mind, including her hidden memories and inner thoughts.

Weaknesses: After her first death, her power over Wonderland has decreased significantly due to the arrival of the Infernal Train. Since she's an embodiement of Alice's madness, she will likely disappear if Alice ever manages to fully get rid of her inner darkness.

Retrieved from "https://vsbattles.fandom.com/wiki/Queen_of_Hearts_(American_McGee%27s_Alice)?oldid=4767544"
Community content is available under CC-BY-SA unless otherwise noted.