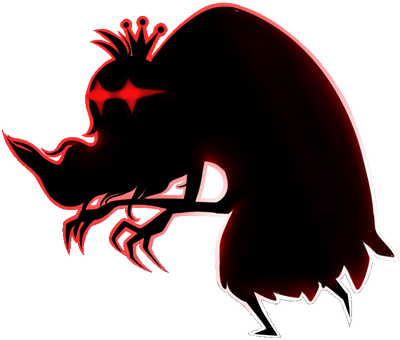 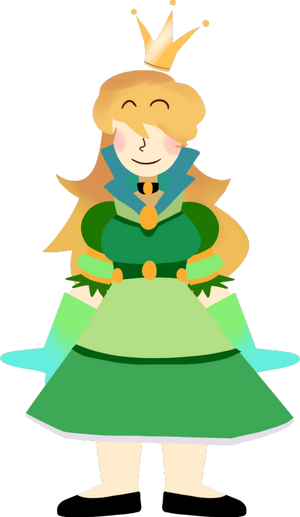 Queen Vanessa is a minor antagonist in the game A Hat in Time. Appearing exclusively in one act within the chapter Subcon Forest, Hat Kid must enter the manor of Queen Vanessa, avoiding her at all costs while restricting any usage of her hats/abilities to obtain a singular time piece.

Before the events within game, Queen Vanessa was once in a relationship with a prince (Heavily implied to be The Snatcher) for an unknown amount of time. However, this briefly ended over a single misunderstanding, condemning the prince enviously to a dungeon, resulting her to alter into the form she currently takes today.

Age: Unknown (Old enough to attain a role as a queen and princess)

Classification: Corrupted Human, Queen/Princess (Was previously a princess prior to an accident her mother had, which declared her queen)

Powers and Abilities: Superhuman Physical Characteristics, Darkness Manipulation (Her body fumes from it entirely. Engulfs Hat Kid in darkness once finding her. The area around her darkens once she spots Hat Kid), Transformation & Corruption (Type 1, her compulsive jealousy over her prince corrupted her, forcing her to transform into a shadowy figure), Light Projection (Emits a red glow from her eyes), Enhanced Hearing (Instantly heard and detected Hat Kid entering her manor merely from her footsteps), Voice Projection/Telepathy, Vibration Manipulation, Initiative Fear Manipulation (Queen Vanessa easily intimidated Hat Kid, despite her not being fearful towards menacing figures such as The Snatcher or The Toilet of Doom), Telekinesis (Demonstrated this against objects and on Hat Kid), Intangibility (She can phase through doors, and make objects phase through them as well, although it is likely not combat applicable), Ice Manipulation (Froze over the entirety of the town she and her manor resided in, froze a mafia goon into an ice sculpture and presumably did this to numerous other people as seen around her manor), Weather Manipulation (The ice she breached upon the town forced it into a permanent state of winter. She can also conjure lightning, whether it'd be at will or at random), and Durability Negation (Via Ice Manipulation and possibly Darkness Manipulation)

Attack Potency: Likely Multi-Solar System level (Presumably overpowers Hat Kid once finding her). Ignores conventional durability via Ice Manipulation (Can freeze someone to the point of turning them into a sculpture leaving them inanimate) and possibly Darkness Manipulation (Engulfed Hat Kid in darkness, possibly killing her in the process)

Durability: Likely Multi-Solar System level (Should be no weaker than Hat Kid)

Intelligence: High. Despite her mental state and given her position of authority as Queen/Princess, Vanessa was depicted to be a capable figure as such.

Weaknesses: She is driven mad with envy